Our research focuses on creating, understanding and controlling materials at the nanometer scale. We have a strong focus on surface science, in particular, exploring chemical and molecular properties and processes at surfaces and at interfaces.

Our group's research interests include:

Our group works with around 25 universities, 5 government laboratories and 50 companies in Australia and abroad. His group hosts a comprehensive surface science capability including XPS, ToF-SIMS, SPM, AES/SAM and contact angle analysis, supported by a state-of-the art visualisation and instrument remote access facility.

We are investigating the fundamental mechanisms of metal and protein binding to the plasma polymer surfaces and optimising the surface, metal, metal-ligand and protein chemistries to achieve optimal performance of the surface bound proteins in enzyme linked immunosorbent assay (ELISA) screening and protein ligand-cell based screening assays.

It is known that plasma polymers can be used to bind metals that can then subsequently bind biological proteins of interest in a functional manner. To date, only a small amount of work in this field has been conducted, primarily by CSIRO researchers. The benefits of this approach are that the plasma polymer deposition technique allows the surface functionalisation on numerous materials including both organic, inorganic and metal substrates. This research, based on the principles of IMAC, Immobilised metal affinity chromatography, is investigating the fundamental mechanisms of metal and protein binding (via XPS, ToF-SIMS and the use of recombinant proteins, supported by extensive multivariate analysis including PCA, HCA and self organised mapping) to the plasma polymer surfaces and optimise the surface, metal, metal-ligand and protein chemistries to achieve optimal performance of the surface bound proteins in enzyme linked immunosorbent assay (ELISA) screening.

This is a CSIRO – LIMS joint project.

Anthracyclines such as doxorubicin are among the most effective chemotherapy agents for the treatment of a wide variety of cancer types. Although many mechanisms of action have been proposed, it is broadly accepted that the primary mechanism of action in cancer cells involves DNA damage. However, doxorubicin also attaches covalently to DNA in a reaction that is mediated by formaldehyde.

The research team has demonstrated that the delivery of formaldehyde via suitably designed pro-drugs greatly enhances the rate of cell death. This raises the possibility that efficient and specific delivery of pro-drug to cancer cells, for example using a nanoparticle delivery system, might allow lower doses of doxorubicin to be administered. This in turn has the potential reduce the incidence of cardiotoxicity associated with doxorubicin use and extend patients’ lives.

A class of size controlled liposomal nanoparticles has been designed which allow the delivery of either doxorubicin or pro-drug to target cells. Excellent preliminary results have been achieved in vitro with high efficacy demonstrated and low toxicity to cells.

We are developing an extended panel of nanoparticle compositions and structures using the CSIRO RAMP high throughput molecular fabrication capability and screening these for behaviour against multiple cell lines and in multiple treatment regimes.

The systems are being characterised using molecular and biomolecular imaging and analytical approaches including confocal microscopy, ToF-SIMS, XPS and AFM. These studies will be supported by multivariate analysis including principal components analysis, cluster analysis and self organising maps.

This is a CSIRO-LIMS joint project.

Surface grafting of electrospun fibres for the control of biointerfacial interactions

The development of electrospun nanofibres from biodegradable and biocompatible polymers has created exciting opportunities for biomedical applications. Meshes of fibres with high surface areas, porosities and appropriate stiffness have been produced through the electrospinning technique.

Despite their desirable structural and topographical properties, the nature of the fibre surface has inhibited their development. Hydrophobicity, undesirable non-specific protein adsorption and bacterial attachment and growth, coupled with a lack of surface functionality and a full understanding of the interactions between cells and extracellular matrix (ECM) molecules have impeded the success of these systems.

Chemical and physical treatments have been applied to the fibres in order to modify or control their surface properties. Chemical modification using controlled living radical polymerization has successfully introduced advanced functionalities on the surface of some fibre systems. Atom transfer radical polymerization (ATRP) and reversible addition fragmentation chain transfer (RAFT) techniques are two of the most widely investigated techniques.

We explore the surface of electrospun nanofibres scaffolds via controlled living radical polymerization in order to create low fouling materials for cardiovascular applications. The surface modification of the fibres is expected to reduce the foreign body response improving biointerfacial interactions. In vitro and in vivo assays is undertaken to analyse cell and material interactions and corroborate the low fouling properties of the fibres. 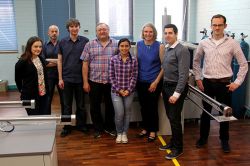