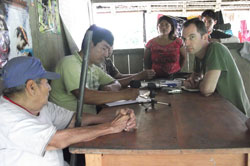 Our purpose is to investigate linguistic diversity in all its aspects.

We believe that studying linguistic diversity is of critical importance. Each language offers a unique window into one possible way of perceiving and interacting with the world.

By studying a wide range of languages we contribute to:

We believe that our work will and should empower minority language communities across the world.

Our findings support the maintenance of language diversity by:

We live in the highly multilingual city of Melbourne. Our focus on linguistic diversity reflects this fact and allows our research to engage directly with the visions and needs of the communities that make up this city.

We explore the diversity of language and the multilingual settings in which most minority languages are spoken. We do this through:

We facilitate internationally respected empirical research on a diverse range of minority languages from many parts of the world, both spoken and signed, and with a particular concentration on the Asia-Pacific region.

We produce comprehensive descriptions and reference grammars that are grounded in rich data collections and actively engage with research questions addressing the cognitive, social and cultural aspects of multilingualism.

We contribute to the wider understanding of the mechanisms and dynamics of linguistic diversity and multilingualism with an emphasis on bridging the gap between data-oriented and theory-oriented approaches.

La Trobe researchers are very active in addressing the most pressing of all global problems in linguistics in the 21st century: language endangerment. It is estimated that there are over 7,000 languages spoken or signed around the world, and more than half of these are facing extinction within the next century as a result of various forms of intercultural contact.

The work undertaken by our members – and a significant number of our postgraduates – includes recording and archiving little-known languages, some which have never previously described (this is ‘language documentation’) as well as writing analytically rigorous descriptions of the structures and systems of those languages (this is ‘language description’). Language description also includes the study of phonetics, the multilingual situations in which many languages are found and dealing with the social use of language.

Phonetics is the study of the sounds of language – the very first component of the grammar of a language – and it is essential to an understanding of how language works. Modern phonetic research has evolved well beyond the skill set of a general linguist and our specialist researchers are part of advancing this knowledge. Modern phonetic research is truly cross-disciplinary, with strong links to speech researchers in psychology, electrical engineering and computer science, to name the most prominent disciplines.

In addition to providing phonetics advice to general grammar researchers, phonetics at La Trobe is the source of cutting edge speech perception, acoustic and articulatory research into Australia's indigenous languages. This work is supported by an articulatory phonetics lab, and by a professional-quality recording studio.

The occurrence of multiple languages within one space and time is the default situation across the globe, and is locally present at La Trobe University and in the surrounding suburbs, an area of considerable multilingual diversity within Melbourne. Even what counts as a language – that is, its semiotic make-up – constantly changes as part of a host of complex inter-dependent processes. These processes include investment and disinvestment in nation-building infrastructures (e.g. education, transportation, communication), population mobility, and the increasingly common practice of using languages to sell goods and services to new markets.

In everyday encounters, these processes are also initiated when those involved in the act of communicating define language and its vitality, and also evaluate accents and ways of speaking. This research program focuses on understanding these connections via empirical work on multimodal language use in everyday contexts, especially face-to-face talk and mass mediated representations of language and social relations.

Language may be spoken, written or signed, but rarely do these modes of communication exist in isolation. Typically, they will interact, often in combination with other communicative features such as gesture, movement and image. In today’s digital world, multimodality plays an increasingly important role in daily language use, blurring the boundaries between speaking, reading, writing and viewing in all of its multilingual complexity.

Multimodality as a research area engages with the ways in which these different aspects of language appear in and across these multiple spaces and landscapes. Deaf studies and sign language research have been research strengths at La Trobe University for many years, and La Trobe also has a highly successful program teaching Auslan (Australian Sign Language).

Another major focus of Linguistics at La Trobe University is the study of sociolinguistics, including language variation and change. This includes work on: the processes of language endangerment in various parts of Asia including China, Thailand and India; the construction of language ideologies and their relationship to institutions and the media in Indonesia; politeness and gender in Japanese; longitudinal research of working class women’s language in eastern Japan; and most recently on the impact of immigrant languages on Australian English, particularly with the emergence of identifiable ethnolects (that is, 'ethnic varieties') in multicultural cities such as Melbourne.

These issues are fundamental to understanding current Australian culture, with implications for issues such as relations with its near neighbours and the capacity for Australia to engage in effective dialogue with the wider world. In addition, a number of our researchers are making substantial contributions to the understanding of the relationships between languages and linguistic varieties, and the mechanisms and processes of language change, based on the substantial data collected in the area of language documentation and description, particularly for languages in Asia, Africa and Oceania.