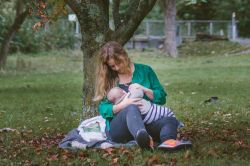 Lactation immediately follows childbirth, and most Australian women start breastfeeding in the maternity hospital. However, breastfeeding is not straightforward for many mothers and infants.

The Centre is interested in all aspects of breastfeeding, from the science of lactation, to society-level issues. Our staff and students have conducted randomised trials, cohort studies, cross-sectional studies, audits and qualitative studies in this area. Our projects include clinically focused studies on nipple and breast pain and infection and the use of medicines for breastfeeding women, as well as interventions aiming to increase the maintenance of breastfeeding in communities with low rates. We have partnerships with the major Victorian maternity services, Maternal and Child Health services, and the Australian Breastfeeding Association, the main advocacy group in Australia. Professor Lisa Amir is the founder and Editor-in-Chief of the International Breastfeeding Journal [external link].

A survey to define breastfeeding

This Delphi study with international stakeholders aims to develop a core outcome set of key, agreed upon breastfeeding definitions to improve the consistency and uniformity of outcomes reported in trials and systematic reviews designed to support women to breastfeed. It involves three rounds of surveys.

Many outcomes are reported in randomised controlled trials that aim to improve breastfeeding. Consistent with best practice, we are preparing a generic protocol to inform a core outcome set for systematic reviews of such interventions. The working group includes eminent international experts and consumer engagement through the Australian Breastfeeding Association.

The World Health Organization and Australian health authorities recommend to exclusively breastfeed for the first six months of a baby’s life, feeding no other fluids or solids. Although most women in Australia start to breastfeed their baby, they often give up after some time. Only 15% of babies are still exclusively breastfed when they are five months old. Breastfeeding as a new mother can be difficult. This study explored if proactive mother-to-mother support helps with keeping up breastfeeding for six months or longer.
The study was carried out between February 2013 and December 2015 in three hospitals in Melbourne. Over 1500 first-time mothers took part.

The study received funding from The Felton Bequest, Australia and La Trobe University.

The main outcomes paper [external link] was published in EClinicalMedicine in 2019. The study was featured in The Age newspaper in an article titled "Mum-to-mum phone support boosts breastfeeding: Study" (Miki Perkins, 6 March 2019) and also in an interview on ABC Radio with Jon Faine on March 6, 2019.

Breastfeeding is important for maternal and child health. This is the public health message. Mothers should feel free to breastfeed whenever and wherever they need to. Yet there are many deterrents to breastfeed in public.

We conducted interviews and focus groups with breastfeeding mothers in three local government areas in 2016. In 2018, we did our research at The Royal Women’s Hospital.

We received input from over 80 mothers who spoke five languages. Also health professionals and council planning staff participated in our research. Using these data, we have developed design guidelines. These guidelines outline how a range of everyday shared spaces could become breastfeeding-friendly. They also suggest optimal design characteristics for dedicated breastfeeding spaces.

An article about this study [external link] was published in The Conversation in June 2019.

Fear of medicines is increasingly leading women to stop breastfeeding unnecessarily. Most medicines can be used safely during breastfeeding at the recommended dose, but there are exceptions that necessitate caution.

Medicine use for breastfeeding women is an ongoing research topic at the Judith Lumley Centre. Several research projects have been undertaken over time. Please refer to the Medicines and breastfeeding webpage for further details.

This project has two components:

This project is funded by the Therapeutic Guidelines Ltd/RACGP Foundation (2020-2021).

There is controversy about the condition known as ‘breast thrush’ or breast candidiasis in lactating women which has led to confusion among clinicians and the community. This is the first prospective longitudinal study to examine simultaneously both Staphylococcus aureus and Candida spp in breast infections and was designed to resolve the current controversy surrounding the primary organism responsible for the condition known as ‘breast thrush’: Candida spp or S aureus?

This project is a descriptive study of 360 breastfeeding women, recruited from the Royal Women’s Hospital and Frances Perry House. It also looked at maternal physical and mental health in the first eight weeks after giving birth.

Nine papers have been published since and further publications are in preparation.

Find out more about this study on the CASTLE webpage

Breastfeeding provides infants with the optimal start to life. However, exclusive breastfeeding for six months is uncommon in Australia.

We had three groups in this study in ten Victorian Local Government Areas. Group 1 received standard care. The women in group 2 were given breastfeeding support at home. Group 3 not only had home visits but were also given access to community-based breastfeeding drop-in centres.

We found no difference in breastfeeding maintenance at three, four or six months in either the home visit or home visit plus drop-in groups compared with the comparison group. Early home-based and community-based support proved difficult to implement. Interventions to increase breastfeeding in complex community settings require sufficient time and partnership building for successful implementation.

The study received funding from the Victorian Department of Education and Early Childhood Development.