This speech was delivered to the National Press Club on 6 July 2022 by Professor John Dewar AO, in his capacity as Chair of Universities Australia.

This is certainly an exciting year for La Trobe. We’re fifty. And of course we’re celebrating. But also preparing for the next half century.

Message from the Vice-Chancellor

The Hunting Ground documentary, released here next week, raises issues that we cannot ignore. We have a responsibility to champion change.

On Tuesday 23 September 2014, Professor Dewar spoke and participated in a panel discussion hosted by CEDA on the Federal Government’s proposed changes to the higher education sector.

The future of the Australian University

On Wednesday 1 July 2015, Professor Dewar spoke at a La Trobe University Ideas and Society forum on the future of the Australian University.

Recommended by the Vice-Chancellor

Finding Love in the Stacks

Speech given by Dr Clare Wright at State Library of Victoria, 31 May 2018 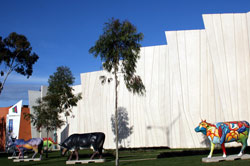