A Sydney doctor who turned the driveway of his home into a pop-up Covid-19 vaccination site is the subject of a portrait by artist Sam Dabboussy who has been awarded the Australian Muslim Arts Prize 2022 for his work, Dr Jamal Rifi.

At nearly 150cm high, the oil on canvas work is a tribute to a highly respected member of Sydney’s large Muslim community and beckons the viewer to lean in and learn more about Dr Rifi himself.

Australian Muslim Artists is an annual exhibition hosted by the Islamic Museum of Australia (IMA) in partnership with La Trobe University, which once again this year saw entries pour in from across the country.

Based in Kyle Bay, NSW, Dabboussy was stunned to hear the good news after submitting work for the past two years.

“It feels fantastic and it’s an honour. It’s nice recognition for all the hard work I have put in over the last year. I am also grateful that Dr Jamal Rifi will be getting more exposure and recognition for the work he has done in the community,” Mr Dabboussy said.

“It is wonderful and well-deserved recognition for Sam, an established artist, to receive this prize. His prize-winning work was certainly a standout piece this year. That said, it was also very refreshing to receive some very good submissions by artists whose works we’ve not previously been familiar with,” said Dr Mohammed.

With no binding theme, the fourteen shortlisted artists this year have referenced everything from the Quran, to political conflict and Ramadan, the Muslim month of fasting. The mediums too, are varied and include glasswork, textiles, digital art, calligraphy and more.

“Australian Muslim Artists represents a unique opportunity for both emerging and established artists to exhibit their work in a professional gallery setting and alongside their peers. And, for the awarded artist, there’s also the prestige of having their work acquired as part of the La Trobe University art collection,” said Mr Bouzo.

“To partner with La Trobe University who really value deep connections with diverse communities such as ours, is an honour,” he said.

“It is wonderful to once again be part of this unique initiative that celebrates achievement within the Muslim artist community,” Professor Dewar said.

“That this year’s prize has been awarded for a work that recognises the critical role individuals can play in the lives of others accords strongly with the University’s ethos of supporting communities; I warmly congratulate Sam on his achievement.”

The Australian Muslim Artists exhibition is on display from 25 August – 15 November 202 at the Museum and online.

As an acquisitive prize, the artwork will become part of the La Trobe Art Institute which manages a collection of art acquired by the University and which has an exhibition and education facility in the arts precinct of central Bendigo. 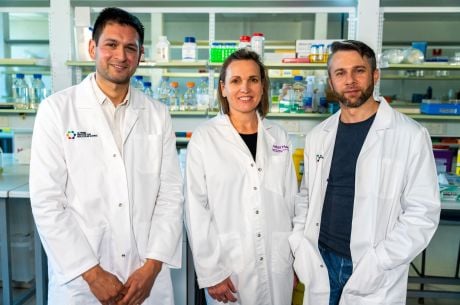