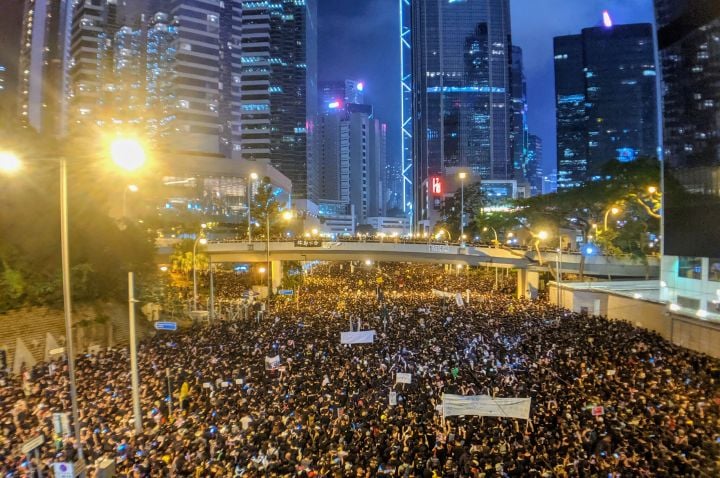 When Britain ceded its control of Hong Kong in 1997 – after its 100-year lease expired – concerns were raised that a 50-year “one country, two systems” formula would be insufficient to protect citizens’ rights.

Britain’s last governor of Hong Kong, Chris Patten, was among those warning about the risks to the territory’s autonomy under Chinese control.

However, it was argued at the time the “one country, two systems” deal was the best outcome that could be struck under the circumstances.

Twenty-two years later, not quite halfway through a 50-year transition to a notional end to a “two systems” arrangement, it is clear that the relatively benign outcome envisaged in 1997 is under unusual stress.

Mass pro-democracy demonstrations over recent days have underscored the fact that Hong Kong residents are fearful of creeping mainland control that will obliterate their relatively unfettered rights under the 1997 formula.

Their immediate concern is an extradition bill, before Hong Kong’s legislature, that would enable Beijing to extradite alleged criminals. The legislation invites understandable concerns that it could be misused to secure the extradition to the mainland of China’s critics under the pretext these individuals had engaged in criminal activity.

Hong Kong’s relatively free media are alarmed at threats to press freedom inherent in the bill.

Beijing has done little to assuage these concerns. It has accused “foreign forces” of misleading Hong Kongers as part of an attempt to destabilise China.

In China, authorities have blocked foreign news sites to prevent the dissemination of reports and images from the streets of Hong Kong. This is no doubt out of concern that street demonstrations might become contagious on the mainland.

The fact these demonstrations coincided with the 30th anniversary of the June 6 1989 Tiananmen massacre in which hundreds, if not thousands, died in a government crackdown will have fuelled Beijing’s nervousness about developments in Hong Kong.

What distinguishes the latest mass protests against Chinese attempts to circumvent its 1997 “one country, two systems” undertakings from protracted disturbances in 2014 is that this time it reflects increasing alarm about Beijing’s stealthy attempts to extend its control.

In 2014, demonstrations against Beijing’s violation of its commitment to autonomous local elections lasted months. This was the so-called “umbrella movement”, distinguished by the symbolic carrying of umbrellas by demonstrators.

In 2019, and judging by events characterised by fairly heavy-handed use of tear gas, water cannons and other methods to break up the demonstrations, the authorities have resolved to try to nip in the bud this challenge to Beijing-dominated Hong Kong rule.

Whether this works remains to be seen.

The disturbances pose a challenge to Western governments at a particularly fraught moment in global affairs. Relations between the US and China are on a knife’s edge over trade and other issues. This includes sales of sophisticated weaponry to Taiwan, tightening sanctions on Iran’s oil exports, moves to bar the telecommunications supplier Huawei from building 5G networks of US allies, including Australia, and a confrontational approach to China in Washington more generally.

Ill will over Hong Kong will not be helpful.

From Australia’s standpoint, the Hong Kong disturbances come at an awkward moment as a newly elected government in Canberra wrestles with China policy.

Foreign Minister Marise Payne’s initial response to events in Hong Kong was too meek. Through a spokesperson, she said:

Australia’s interests in Hong Kong deserve something more forthright than this.

Not only does Hong Kong absorb A$11 billion worth of Australian merchandise exports annually, services trade at A$3 billion is significant, and total investment in Australia of A$116 billion puts the former British territory in the top 10 foreign investors.

On top of that, about 100,000 Australians are resident in Hong Kong. This is not a small number in a population of 7.5 million.

While it is true Hong Kong is less important economically than it was in 1997, when its GDP was 16% of China’s (it’s now 2%), it still remains an indispensable financial conduit and testing ground for financial reforms.

Hong Kong provided the financial platform for China’s cautious experimentation in its move towards making the yuan a global currency. Hong Kong’s stock exchange is an important vehicle for capital-raising for Chinese companies.

The events of recent days have placed Beijing’s woman in Hong Kong, Carrie Lam, who was selected by Beijing as chief executive two years ago, in an invidious position. If she yields to the protesters and withdraws the extradition law, she will run foul of her controllers in Beijing.

If she pushes ahead in the Legislative Council with the support of 43 pro-Beijing lawmakers out of 70, as she insists she will, she risks further disturbances.