Emmanuel Macron will be the second French president to visit Australia.

When French President Emmanuel Macron visits Australia this week for talks with Prime Minister Malcolm Turnbull and other ministers, it will be an occasion of more than usual significance.

Coming on the heels of Macron’s talks in Washington with US President Donald Trump, Macron’s meetings with Turnbull will be informed by his impressions of an idiosyncratic presidency.

High on the list for discussion will be trade, including Australia’s desire for quick progress on a free trade agreement with the European Union. Regional security interests and climate change will also have an airing.

Beyond all of that, Turnbull and Macron will no doubt seek to build on the amity apparent in France last week during the opening of the John Monash Centre at Villers-Bretonneux, where French Prime Minister Edouard Philippe gave a poignant speech.

For many young Australians, this earth was their final safe place. For many of them, this earth was the final confidante of a thought or a word intended for a loved one from the other side of the world. Loved ones who would only learn the sad news several months later.

More can be made of these occasions than is warranted, but the centenary of the end of the first world war provides an opportunity for two liberal democracies to reaffirm their commitment to human freedoms and the rule of law.

Australia and France may find themselves on opposite sides of the world, but in an era disrupted by China’s rise and Russia’s flagrant disregard for international norms, these sorts of relationships become more important.

Perhaps surprisingly, Macron will be only the second French president to visit Australia in the history of relations that go back to the mid-19th century, when consular links were first established. (The only other one to visit was Francois Hollande in 2014 for the G20.)

The first and second world wars strengthened those bonds, but it is probably fair to say Australia and France have not been as close to each other as might have been given their extensive trading and investment partnership.

That may be about to change, given the need for Australia to nurture its security relationships beyond the American alliance at a time of considerable uncertainty in global affairs.

While the US relationship remains the cornerstone of Australian security, a broadening of defence ties with other like-minded Western democracies – and regional powers like Japan – becomes more pressing.

The UK’s Brexit is putting greater onus on Australia’s European ties, which will no longer be viewed through London’s prism. This may turn out to be a benefit to Australia of Britain’s Brexit debacle.

Underpinning the Australian-French security relationship is the Joint Statement of Enhanced Strategic Partnership signed in March 2017.  This statement encourages the two countries to strengthen engagement in the Indo-Pacific region.

In some respects, the strategic partnership could be regarded as symbolic. But it is having the effect of promoting enhanced contacts more or less across the board, including security, intelligence and climate issues.

The two sides have also been working on a logistical defence agreement to enable closer coordination in the Pacific, including combined force training exercises.

To an extent, this enhanced security relationship has been taking place under the radar. A growing security partnership was highlighted in Australia’s 2016 Defence White Paper.

Both countries are active in arms control regimes such as the Australia Group, the Comprehensive Nuclear Test Ban Treaty, the Missile Technology Control Regime and the Proliferation Security initiative.

Cyber security is another collaborative area.

None of this is to say that France has the capacity – or the intent – to be become an Indo-Pacific power. But it should be remembered that it retains Pacific possessions, namely New Caledonia, French Polynesia, and Wallis and Futuna.

Indeed, it’s unlikely that Macron would have made the long journey to Australia if he was not also bound for New Caledonia, where its citizens will vote on independence from France in November this year. Macron will be seeking to forestall such an outcome.

Turnbull and Macron will no doubt dwell on Australia’s $50 billion deal to buy 12 French submarines, and progress made in establishing the Future Submarine Program based in Adelaide.

Whatever criticisms might have been levelled at the choice of the French option ahead of German and Japanese contenders, the FSP will bolster a significant long-term strategic partnership.

Among Turnbull’s preoccupations in his discussions with Macron will be to ensure  negotiations on an Australian-EU free trade agreement get off to a good start.

Britain’s decision to leave the EU means such an agreement has come more sharply into focus. France’s powerful farming lobby dictates that it will be a cautious participant in discussions about an FTA that would improve access for Australian primary producers.

Gaining Macron’s personal support for such a process will be important.

In this regard, Turnbull would be able to point out that commercial and investment ties between the two countries are already extensive, leaving aside the fact the EU is the largest source of foreign investment and second-largest trading partner for Australia.

In 2015-16, the EU’s direct investment in Australia totalled $157.6 billion, and Australia’s investment in the EU was valued at $111.8 billion. Total two-way merchandise and services trade was worth $95.6 billion.

Of this, France’s direct investment in Australia was valued at $28 billion, and Australian investment in France at $55 billion. Most of France’s largest listed companies operate in Australia, employing something like 60,000 people. Two-way trade was worth about $8 billion in 2016, weighted significantly in France’s favour.

France itself is the world’s sixth-largest economy, fifth-largest exporter and a financial hub in the Eurozone. Its status as a financial centre will be enhanced post-Brexit.

Then there is Macron, who has quickly established himself as a unique leader in a European context. His centrism as head of his own movement has not pleased all in the country he leads.

Macron’s relationship with Trump, built partly on their respective statuses as “ousiders”, gives the French president additional heft in an uncertain world.

His willingness to assert positions on climate change and the nuclear agreement with Iran that contradict those of the Trump administration further enhances his credibility. Turnbull would be advised to pay attention to what Macron has to say on a range of issues, not least climate.

As custodian of the Paris Accords, Macron has both a personal and professional interest in seeing the agreement strengthened, not diminished. His advice to the US Congress – “There is no Planet B” – resonated around the world.

Turnbull could do worse than endorse Macron’s choice of words.

This piece was originally published on The Conversation. 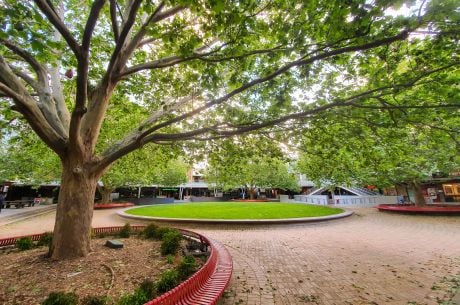