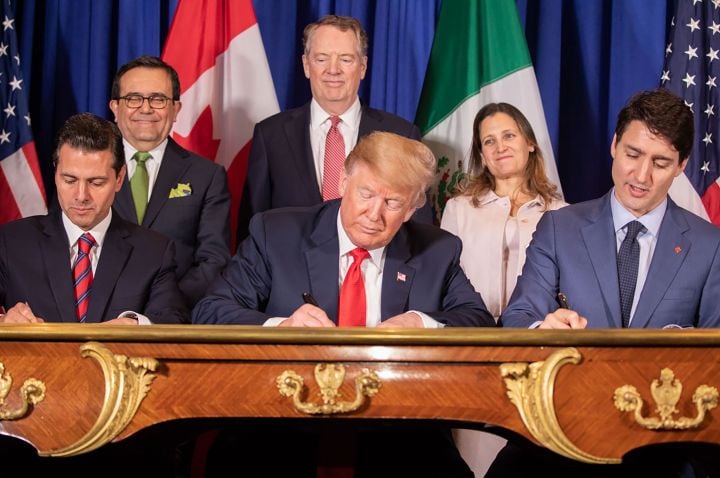 The negotiations were strained and at times it looked like it would be stillborn, but the USMCA (the new North American Free Trade Agreement linking the economies of the United States, Mexico and Canada) was signed in November 2018 and awaits ratification.

Its future is still uncertain. Although U.S. President Donald Trump finally removed tariffs on steel and aluminium imports from Canada and Mexico, something both countries and even some congressional Republicans were demanding for the deal to be ratified, Democrats in the U.S. are unhappy with its costly monopoly protection for new pharmaceuticals and weak enforcement measures for labour and environmental protection.

But beneath the political jockeying is a sleeper issue concerning public health that signals a bad agreement.

We undertook a recently released health impact assessment of the USMCA, focusing on three specific aspects of the agreement with direct or indirect health effects —pharmaceuticals, health and environmental regulations and labour and environmental protection.

For prescription drugs, the costs of which have risen dramatically since the era of patent protection in trade agreements, the USMCA contains provisions the Americans wanted in the Trans-Pacific Partnership agreement.

These provisions were suspended by the remaining countries when Trump pulled the U.S. out of that agreement. Now they’re back in, but with an even longer 10-year guaranteed monopoly for biologics, a new category of costly drugs used to treat cancers and autoimmune disorders. Generic equivalents known as “biosimilars” can cut the price by almost half.

Canada currently offers eight years of market protection for biologics; the additional two years could eventually add almost $170 million to each year’s drug costs. Hardest hit would be Mexico, which presently offers no such monopoly rights for biologics.

The USMCA also locks in rules that make it easier for drug companies to “evergreen” their products through minor changes in their components or in how they’re administered, extending the years of patent protection and prevent regulators from using, for several years, the patent drug company’s test data when approving generic versions.

A more subtle but critical set of changes in the USMCA imposes new constraints on the three countries’ abilities to enact health, safety and environmental policies or regulations.

It is these so-called behind-the-border rules in trade and investment agreements that have garnered the greatest public health concerns. The USMCA tries to assuage these concerns by affirming countries’ “inherent right to regulate” including “to protect public health, safety, the environment (and) natural resources.”

But it immediately undercuts this right by specifying that it must be exercised “in a manner consistent with this agreement.” That “consistent manner” includes provisions that could make it harder for Mexico to use existing safeguards under World Trade Organization rules to ensure domestic food security or to guarantee minimum food prices to reduce rural poverty and support small-scale Mexican farmers.

It requires the three governments to ensure that any new international standards upon which new regulations might be based “do not create unnecessary obstacles to international trade,” suggesting trade issues will trump new health regulations. This became an issue even during negotiations, when the U.S. wanted the agreement to ban any front-of-package nutrition labelling that would warn consumers of unhealthy levels of fat, salt or sugar.

Canada and Mexico rejected this, but the USMCA contains several provisions on labelling that could lead to trade disputes should the two other countries choose to adopt new nutrition labels, as Canada is proposing to do.

Other rules open the doors for “persons of another party” — in other words, primarily U.S.-based corporations — to have a seat at the table when Canada or Mexico decide to consult on new regulations.

This runs the risk of regulatory capture by private vested interests, akin to inviting the foxes to guard the hen house. Unaware that your cosmetics are not always healthy or safe? The USMCA would like to keep it that way, requiring governments to wait until a problem shows up and fix it later.

In a similar way, USMCA provisions require governments to submit detailed scientific evidence and explanation for any new government regulation, which is likely to lead to “regulatory chill,” slowing down or preventing the introduction of novel health protection measures. This risk is compounded by an entire and enforceable chapter that aims to have the three governments harmonize their regulations to enable freer movement of goods across borders.

The economic elephant in the USMCA is, of course, the U.S., whose regulatory rules will likely set the tone for Canada and Mexico, and the Trump administration is keen to undo as many health and environmental regulations as possible.

There are some less troubling glimmers in the new agreement. Controversial rules allowing foreign investors to sue governments over regulations that may undermine the value of their investment have been eliminated between the U.S. and Canada, apart from a three-year window for “legacy claims” to be made.

Canada fared particularly badly under the old NAFTA while the U.S. never lost a case, yet it was the United States that scrapped the rules while Canada wanted to keep them. So go figure. The Americans hedged their bets, however, by retaining the rules to protect U.S. investors in Mexico.

The USMCA also contains provisions that claim to protect labour rights and the environment, often used by governments to sell trade deals to skeptical citizens.

A key labour provision, however, requires Mexico to amend its laws to allow workers to more effectively collectively bargain. The country recently passed legislation to satisfy this provision but questions remain over implementation and enforcement strategies.

A second provision mandates a substantially increased minimum hourly wage in Mexico’s auto-manufacturing sector, which could help relieve poverty for Mexicans, although Mexican exporters might opt instead to pay the low tariff the U.S. would levy if they fail to raise wages.

And while there’s lots of references to labour rights and multilateral environmental agreements in the USMCA, it’s unsurprisingly silent on climate change and the Paris climate accord. And there are escape clauses — provisions only become enforceable if a country lowers its existing level of protection to gain a trade or investment advantage. This might prevent a race to the regulatory bottom, but it’s hardly a reassuring reach for the top.

In the end we have an agreement that binds governments’ future regulatory options in return for scant evidence of improved labour or environmental protection, or even economic gain. The IMF, for example, estimates a net economic boost across the three countries of US$550 million a year, chump change at best.

The U.S. International Trade Office (ITO), with some fanfare, begged to differ, announcing American gains of US$62 billion and 176,000 new jobs. The rub here is that these numbers rest on a unique modelling assumption, “reduced policy uncertainty,” that raised the eyebrows of most conventional trade economists. Remove this novel assumption and the American study actually shows a net loss in both income and jobs. Make America Great Again? Perhaps not so much.

As with any trade agreement, some economic sectors will be winners and others losers. But as far as protecting public health is concerned, the USMCA is a big step backwards. Should I wear a mask on public transport?