La Trobe University scientists are preparing to run a world-first clinical trial of a new drug inspired by shark antibodies.

The drug, AD-114, is a human protein that is based on the shape of an antibody of a Wobbegong shark.

Recent tests on mouse models found AD-114 led to a reduction in fibrosis in the lung and liver, after treatment for 14 and 21 days respectively.

Scientists from La Trobe’s Institute of Molecular Science (LIMS) and biotechnology company AdAlta Limited created a humanised version of the shark protein called the i-body, and identified a lead therapeutic i-body candidate for the treatment of fibrosis.

AdAlta Limited, based at La Trobe’s Bundoora campus, recently raised $10 million in an initial public offering on the Australian Stock Exchange to fund world first clinical trials of AD-114, due to begin in early 2018 (ASX: 1AD).

AdAlta CEO Sam Cobb said the company had used the pre-clinical data from its lung fibrosis testing for an Orphan Drug Designation application to the US Food & Drug Administration (FDA).

Ms Cobb said Orphan Drug Designation would give AdAlta special support to develop its treatment for the growing number of people around the world diagnosed with fibrosis.

“We believe that AD-114 has the potential to be a new treatment for pulmonary fibrosis, a respiratory disease which results in scarring of the lung tissues,” Ms Cobb said.

“Current therapies for pulmonary fibrosis are considered sub-optimal and there is a high-unmet medical need.

“The drug’s anti-inflammatory and anti-fibrotic properties are effective in reducing collagen build-up in the lungs, which cause shortness of breath in sufferers and eventual death.

“There is great demand for a treatment as current lung fibrosis drugs have proved to have little impact in treating the disease for which there is no cure.”

“To the average person sharks are a creature to steer clear of, but in the scientific world treatments based on shark antibody have the potential to save lives,” Dr Foley said.

“In the future we think the humanised i-body, AD-114, may also be a suitable drug to treat other forms of fibrosis found in the liver, skin, eyes, heart and kidneys.” 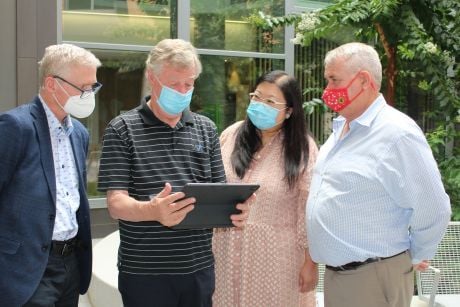