Across cultures, December is a month for celebration and reflection. We asked La Trobe alumni around the world to give us a glimpse into their holiday traditions, and how they celebrated back when they were students.

Rebecca Davis (Bachelor of Arts (Hons), 2012) is a writer and journalist and founder, host, writer and producer of The Good Edit: Gritty Conversations with Jewish Women podcast. Looking back, she remembers the visiting campus rabbi bringing donuts to share with La Trobe students during Chanukah – a joyous eight-day Jewish celebration that finishes on 6 December this year. While Chanukah (also spelt Hanukkah) tends to fall close to Christmas each year, Rebecca says it has nothing to do with yuletide traditions.

‘It’s a common misconception, particularly as Chanukah has crept into mainstream American culture. But while both celebrations are steeped in tradition, they’re unrelated in their origins,’ she says.

For Rebecca, Chanukah is a chance to remember and draw meaning from a 2,000-year-old story.

‘The story still bears great resonance. It shares the spirit of triumph: a powerful message for any minority people who’ve faced and overcome oppression and persecution. Of the many Jewish festivals that punctuate the year, this is one of my favourites,’ she says.

Chanukah commemorates the victory of the Maccabees, an army of Jews, over a Syrian-Greek king who ruled in second century Jerusalem. The king attempted to destroy Judaism and assimilate Jews into Hellenism, outlawing Jewish practice and looting and desecrating their Holy Temple.

‘His actions provoked a revolt by the Maccabees, who fought back to liberate Jerusalem,’ Rebecca explains. ‘When the Maccabees reclaimed the temple, they discovered only enough oil to keep the menorah – a sacred lamp with seven branches – burning for just one day. But once lit, the flame stayed alight for eight days. This is known as the miracle of Chanukah.’

Today, Rebecca celebrates Chanukah by retelling the story and eating traditional food cooked in oil, which symbolises the menorah’s miracle. ‘I usually make my own sufganiyot (sweet fried donuts), though tray upon tray can be bought at Jewish bakeries. People often buy them for each other as gifts throughout the festival. They’re delicious and come with a range of fillings, including jam, chocolate, caramel and custard. In Israel, the flavours are even more elaborate,’ she says.

Another traditional food is potato latkes – ‘like a potato rosti, but with onion’ – which are eaten plain with a little salt, with a smear of sour cream and lashings of smoked salmon, or topped with stewed apple.

‘My mum cooks my grandmother’s recipe. Every year she stands over the frypan, watching the sizzling morsels and shooing me away while she fishes them out of the hissing oil. Hot and crispy is the best way to enjoy!’ On the eight evenings of Chanukah, households gather to light the chanukiah, an eight-branched menorah. In the centre of the candelabra is an extra branch called the shamash (helper), which is used to light the other candles.

Rebecca finds the nightly ritual of lighting the chanukiah a source of optimism and calm.

‘We sing blessings over the chanukiah as we light it. Each evening, we add another candle. On the eighth night, all the candles are ablaze and it’s a beautiful sight. Peaceful, and hopeful. It reminds me of the enduring possibility of light over darkness.’

In India, alumna Shivali Ohri (Master of Marketing Management, 2018) celebrates Pancha Ganapati. The five-day Hindu festival runs from 21 to 25 December in celebration of Lord Ganesha, a popular Hindu god with an elephant head.

‘Lord Ganesha is worshipped in all parts of India and goes by many names, like Ganapati, Vinayaka, Vighneshvara, Ekadanta, Lambodara and Gajanana,’ Shivali says. For Shivali, the festival is like other Ganesh pujas (worship rituals) that occur throughout the year.

‘Usually, we decorate our home and temple with garlands, flowers and light. We then offer prayers to Ganesh’s idol.’

Pancha means ‘five’ in Sanskrit, and the Pancha Ganapati festival focuses on a five-headed representation of Lord Ganesh. Each day, Hindus worship one of Ganesh’s five faces.

‘The best part of the celebration is that Ganesha is dressed in the color of that day, representing one of his five rays of energy, or shaktis. Golden yellow on December 21, then royal blue, ruby red, emerald green and finally brilliant orange,’ Shivali says.

Hindus also practice daily sadhana (spiritual practice) throughout Pancha Ganapati. Each sadhana has a different focus, such as close family, neighbours or colleagues. On the final day, Hindus receive Ganesha’s grace for sadhanas well performed and open gifts they’ve placed before the idol. Today, Shivali works in New Delhi as a Student Recruitment Manager  for La Trobe. But back when she was studying in Australia, she celebrated the festival with her Aussie friends and family.

‘We’d take a bath in the early morning, decorate our home temple, offer our prayers to Lord Ganesha, eat sweets and exchange gifts.’

In Sweden and across Scandinavia, Jul (Christmas) is celebrated on 24 December – a date other cultures might call Christmas Eve. But for Hilda Haqvinsson (Bachelor of International Development, 2016), Jul celebrations will always surpass celebrating ‘a day later’ elsewhere in the world. ‘Christmas is a holiday of great significance to me. My family is not religious, but since it’s an official holiday in Sweden we have a tradition to celebrate it,’ Hilda says.

‘The significance of the holiday is more related to feeling connected and close to family and friends. It’s a time to spend and send extra energy and love to everyone in the world who might need it.’

Hilda celebrates Christmas with her immediate family. She says it’s a time to de-stress from work and other responsibilities and enjoy their company alongside good food and music.

‘In my family, Christmas means eating a lot of food and exchanging a few gifts. My dad spends over a week cooking and planning the Christmas dinner, which is a large smorgasbord with a great mix of hot and cold food – all super yummy.’ Among the food Hilda’s family shares at Jul is pickled herring, sausages, potatoes and a large salted, cooked ham. Another common dish is dopp i grytan – bread soaked in the stock of the Christmas ham, which is eaten with some mustard and the ham itself.

‘We also drink snaps (shots) with our Christmas dinner. When it's time for a snaps, everyone raises their glasses, sings a typical snapsvisa (drinking song), then cheers and drinks the shot!’

As December is Sweden’s darkest month of the year, people decorate their homes with string lights and star lamps. They also display a Julkalender (Christmas calendar) or Adventskalendrar (advent calendar) to count down to the celebrations.

‘The advent calendar originates from celebrating the four Sundays of Advent in Sweden. It contains 24 little gifts, often chocolate, which are opened every day leading up to Christmas,’ Hilda explains.

For children, short episodes of a TV and radio show called Julkalendern offer another way to track the days ‘til Christmas. Hilda says Christmas in Australia was ‘always a little strange’ when she was a La Trobe student.

‘My family came to visit twice. The first time, they brought some typical Swedish things like gingerbread cookies and a spice mix to make mulled wine, to make it feel more like 'normal' Christmas. Other years I celebrated with other international friends over a potluck Christmas meal,’ she says.

‘Even though I always had fun celebrating the holiday in Australia, I do prefer Christmas here in Sweden, where it’s dark and cold. It was weird to celebrate Christmas in the middle of summer!’

Alumnus Andre Petrolo (Bachelor of Arts, 2000) is an educator and mental health trainee working in London. He’s also a member of La Trobe’s London Alumni Chapter committee, supporting graduates living in the UK to connect through social and professional events.

Andre admits he was surprised to learn that Boxing Day (26 December) has nothing to do with the sport of boxing, or the Boxing Day Test cricket match. ‘I didn't know this until I Googled it, but Boxing Day was traditionally a day off for servants, when they received a special Christmas box from their employers. The servants would also go home on Boxing Day to give Christmas boxes to their families.’

‘Boxing Day is great for cinema releases in Australia, so often my friends and I would head to the cinema to take in the latest blockbuster or art house film,’ he says.

And while for many people the holiday has become synonymous with grabbing a bargain at Boxing Day sales, these days Andre relishes it as a time to reflect, rest and regenerate. 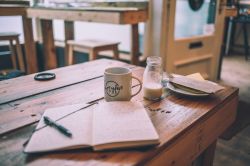 ‘I love nothing more than to simply sit, rest and review the year that’s gone by, as well as look ahead to the new year,’ he says.

‘Personally, I place a spiritual significance on Boxing Day. I treat it as an extension of Christmas by taking stock and being grateful – not only for the things I consider positive experiences, but also the not-so-great things. Sometimes I do this with others, but mostly I do it privately.’

Boxing Day is typically celebrated by countries in the Commonwealth, including Australia, the UK and Canada. But Andre’s been known to mark the celebration as far away as Brazil.

‘My wife Nubia is Brazilian, so last year we spent Boxing Day in Goiânia, a city in her home state of Goiás. Boxing Day is also a chance to spend time with family and friends, wherever in the world we may be.’

How do you celebrate in December? We want to hear your traditions! Share your favourite holiday celebration, photo and story with La Trobe University on Instagram, using #latrobealumni.