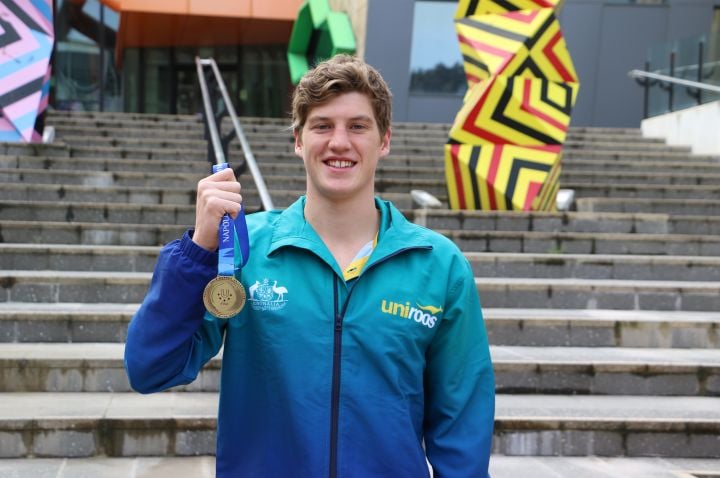 The 19-year-old, who is studying a Bachelor of Business (Accounting and Finance), was a member of the Australian UniRoos Men’s 4x200m Freestyle relay team that took out the bronze medal in a thrilling final behind the United States and Italy.

Smith was one of four La Trobe students to compete at the World Summer Universiade in July hosted in Naples, with taekwondo athlete Kyah English and athletics duo Matthew Clarke and Anna Kelly also part of the Australian UniRoos team.

“It was an amazing experience; I was keen to get over to Europe and experience one of the nicest places in Europe being Italy,” Smith said.

“Getting to stay in a village environment was awesome, and obviously having the high level of competition that it brings being an open meet was also very exciting.”

Smith, who also competed in the 200m Breaststroke, 800m Freestyle and 400m Individual Medley, said the atmosphere within the Piscina Felice Scandone ahead of the 4x200m Freestyle relay final was electric.

“It was definitely the most nervous I’ve ever been; I couldn’t hear myself think and before the race there was a lot of yelling,” Smith said.

“When I jumped in, we were in a pretty good position for the lane we were in and we were between the other two countries (Russia and France) competing for third, so we were where all the action was.

“That really helped me and the other guys push ourselves and get across the line.”

As for his plans for the future, Smith has one eye on qualifying for the Tokyo 2020 Olympic Games, with the next few months to be focused on getting himself prepared for the Olympic trials in June next year.

“I’ve just had a training break and just got back into swimming, so now I’m in a block of base training with a lot of volume,” Smith said.

“I’m doing a lot of gym throughout this next block, with a lot of high reps and high intensity sort of stuff to build strength.

“The next block (after that) will be competing through December to February and sharpening up ahead of the Olympic trials.”

Along with Smith, La Trobe’s three other UniRoos representatives also impressed on the world stage.

Defying an injury-riddled preparation and the searing Naples heat, Kelly finished in eighth place in the Women’s Half Marathon event, while athletics companion Clarke finished 11th in the final of the Men's 3000m  Steeplechase event.

Despite going down in her first-round match up, taekwondo athlete English also performed admirably in her bout with top ranked Brazilian, Carolina Araujo De Vieira, in the Women’s -53kg division.

Head to the official 2019 World Summer Universiade website to view the complete list of results from our LEAP athletes.