Volunteer detection dogs have been trained to find live insects measuring 50 millimetres in length, in an Australian first for an endangered insect species that could revolutionise conservation practices.

While the Alpine Stonefly is the largest stonefly in Australia, it’s one of the smallest animals a dog has been trained to successfully detect in its natural habitat.

Lead researcher Julia Mynott, from La Trobe’s Centre for Freshwater Ecosystems in Albury-Wodonga, said detection dogs are usually trained to sniff out animal nests or faeces, not the animal itself.

“This is an exciting and innovative way to revolutionise how we gather data on our endangered species, no matter how big or small,” Dr Mynott said.

“In the past, we’ve been restricted to traditional methods of detection when looking for stoneflies, which include visual surveys and aquatic sampling.”

Despite their bright orange and green colouring, Dr Mynott said Alpine Stoneflies are difficult to find, especially when they’re in water.

“The Alpine Stonefly is an aquatic insect that hatches in the streams of the Bogong High Plains, where it lives for up to two years. The larvae often burrow underneath cobbles; debris; or boulders, while the adults only emerge between January and April to reproduce.

“With all these factors in mind, it’s easy to understand why the traditional detection methods can be time consuming, and for the larvae, fairly ineffective.

“Right now, we have no idea of the population size of the species.”

Dr Mynott said the ongoing aim for this research project is to transfer the success of the first trial to a similar species, the Stirling Stonefly or Thaumatoperla flaveola, that is found at Mount Buller and Mount Stirling.

Preliminary trials on the Stirling Stonefly suggest detection dogs can transfer their conservation training from one species to another.

“Insects might not be that appealing to everyone, but they are important for ecosystem functioning, particularly in alpine areas that are environmentally important and under threat from climate change.”

“We chose stoneflies as a starting point because they’re such an interesting animal. They have wings but are flightless. They’re sensitive to changes in water quality and, despite their role as one of the top predators in the alpine region, their inability to fly makes them vulnerable to other predators in this environment.

“Now that we’ve successfully trained three dogs, we’re hoping to secure funding that will enable us to conduct future surveys on the Alpine and Stirling Stonefly, and on a third species of stonefly that can be found at Mount Baw Baw and the Yarra Ranges.”

In addition to the detection dogs, the research team hopes to expand their current environmental DNA (eDNA) work on threatened stonefly species, which is a detection method the researchers are using in conjunction with the dog trials.

Owned by local community volunteers, the dogs were trained at La Trobe’s Anthrozoology Research Group Dog Lab in Bendigo, where they spent seven weeks memorising the odour of the Alpine Stonefly in a specialised training program. 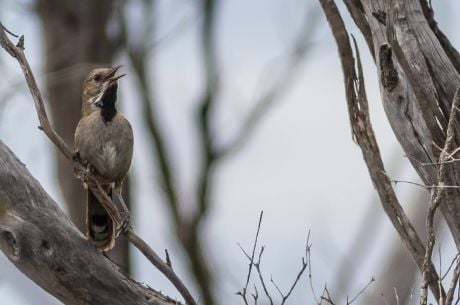