Young Indonesian people like me don’t know anything about the May 1998 violence. How will you engage with them beyond social media selfies?

A female student asked this of Rani Pramesti, a Chinese Indonesian artist who was discussing her digital graphic novel, Chinese Whispers, at an event in Melbourne commemorating the 20th anniversary of Indonesia’s May 1998 violence.

More than 100 people, mostly Indonesians from various ethnic groups living in Melbourne, attended. Other women with Chinese Indonesian heritage who presented their artistic and literary work at the event included survivor-artist Elina Simbolon and journalist and author Dewi Anggraeni.

Twenty years ago, in the lead-up to and following the resignation of long-time Indonesian ruler Soeharto on May 21, violence erupted in which the Chinese Indonesian minority was targeted. This included mass rapes and sexual assaults of Chinese Indonesian women by organised groups acting under orders of the security forces in major Indonesian cities such as Jakarta, Medan and Solo.

Despite evidence of gross human rights violations, the cases were never brought to court. Justice for the victims and survivors thus remains elusive. There is persistent denial and silencing of this violence.

When an initial report on the violence was made public in 1998, the state denied any involvement. The rapes were also denied in media reports on the event, as well as in statements by high-ranking government officials.

Groups working with victims were threatened. One victim, who had agreed to testify at the United Nations, was murdered.

In commemorations of May 1998 over the past two decades, Chinese Indonesian women’s voices have long been absent. The work of Rani, Elina and Dewi presented in Melbourne fills a void in public knowledge of a dark chapter in Indonesian history. At the same time, their voices continue to be contested.

Human rights organisations, including the National Commission for Women’s Rights (Komnas Perempuan), have persistently demanded attention to the violence against women in 1998. However, much of their work has framed the events as a violation of the rights of all Indonesian women, leaving out the racial motives from the narrative of gender-based violence.

Similarly, efforts to mark sites of violence (for instance, through the May 1998 memorial in Jakarta), have placed May 1998 under a broader story of regime change. While this may enhance awareness, it avoids issues central to the violence: the systemic discrimination against Chinese Indonesians, the position of women, and the use of sexual violence as a tool of repression.

Around three months after the May ’98 violence in Indonesia, the Huaren Chinese diaspora online group organised a commemorative event in Sydney to discuss what happened. The event discussed at length the human rights violations against those of Chinese descent, emphasising male testimonies. While the event was important, it downplayed the gendered ethnic violence against Chinese Indonesian women.

The event in Melbourne, although it showcased three Chinese Indonesian women’s art  (see photo above) and literary work, also featured testimonies of two Chinese Indonesian men and comments from predominantly the male section of the audience.  They graphically retold the events of 20 years ago. One recalled protecting his property as if he were a soldier ready to go to war.

Studies of genocidal rape are critical of male testimonies that depict violence against women as a form of communication between men. In other words, the stories emphasise violence against women as a way to de-masculinise the other group, or to make them less of a man, by not being able to protect their women, who are treated as the property of men.

Having predominantly men from the audience commenting about the event was challenged by Rani. She asked for more gender balance, giving women, like the young female Indonesian student, an opportunity to have their voices heard.

Rani’s Chinese Whispers tells the story of May 1998 through her eyes. In 1998 she was 12 and lived in Jakarta. She subsequently migrated to Australia. The nonfiction digital graphic novel traces Rani’s quest to find out how such violence could occur.

Dewi told  Rani that at the time, as a journalist based in Melbourne, she couldn’t believe mass rapes and sexual assault could happen. This was because very few Jakarta-based journalists were able to talk to survivors. It was not until she met a female survivor recovering in Melbourne that she was compelled to do her own research and unearth the truth. Through her writing, Dewi thus challenges the denial of the violence and the silence surrounding it.

Dewi also experienced resistance to her work about the May 1998 violence, particularly her novel My Pain, My Country. The story of the female survivor she met in Melbourne inspired this work. According to Dewi, social media coverage of her book on Australia Plus attracted derogatory and negative comments on their Facebook timeline.

It was claimed that, being located outside of Indonesia, Dewi had no right to write about the events. However, she explained that it was exactly this distance that allowed her to write about May 1998. This remains extremely difficult in Indonesia, where individuals and organisations concerned with this issue continue to be intimidated.

A male audience member, who identifies as an Indonesian with Chinese Indonesian friends and wanted to focus on positive relations between the two groups, challenged Dewi and Rani by asking: “Why don’t we all just move on?”

Dewi responded that “acknowledgement and justice are still needed”. Rani said: “Moving on does not mean forgetting the past or silencing its stories; that’s denial.”

Events like the commemoration in Melbourne intend to create spaces where people can exchange ideas. The responses to the female artists show that their voices remain contested. But, at the same time, those reactions also show that people are affected by the messages that the women are conveying through their work.

More importantly, events such as these raise the question about who can speak or bear witness. As we are further removed from May 1998, inevitably other people will speak up.

Women such as Rani, Dewi and Elina may pave the way for more voices of Chinese Indonesian women – voices missing in earlier commemorations – generating insights into how Indonesia’s past continues to reverberate across time and space.

PHOTO: Elina Simbolon, installation art for the 20-year commemoration of the May 1998 events - by Yacinta Kurniasih, Monash University

This piece originally published in The Conversation. 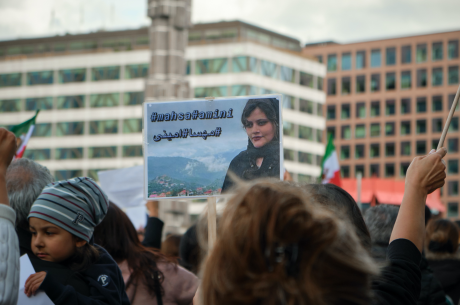