Curious kids: What are cells made of? "I know veins are made out of cells but what are cells made out of?" Asks 4 year old Bea. "That's a great question Bea!" answer Ivan Poon & Georgia Atkin-Smith.

The human body is just like a big puzzle, but with billions of tiny pieces called cells. Our cells come in many different shapes and sizes. Together, they make up all of the parts of our body, from our veins to our brain.

Our cells are really, really small. For example, look at how thin a single strand of your hair is. Although it’s so thin, nearly 20 cells could fit across it. That’s how small they are.

Scientists have discovered cells are made from different building blocks we call molecules, such as water, plus other types like proteins, fats and DNA.

The outside skin of a cell is called the plasma membrane. It is made mainly of molecules called fats. This skin forms a bubble around the outside of the whole cell and holds it together.

Plants also have cells. But plant cells have an extra layer of skin called the cell wall which is strong and tough, not soft like a bubble, which explains why plants like trees can grow so tall.

Like the bones inside our body, cells also have a kind of skeleton called the cytoskeleton (which means “cell skeleton”). It is made from molecules called proteins. The cell’s skeleton makes it strong, and also helps our cells move around the body.

Cells have brains (sort of)

One of the most important molecules in a cell is its DNA, made from a type of building block called nucleotides. DNA is like an instruction book for everything our cells have to do (including making more cells, moving, and fighting germs). As the nucleus stores most of our DNA, it’s just like the brain of the cell.

You might have heard of genes (not the ones you wear, but the ones inside you). They are just like a recipe your cells use to make you! They decide how tall you will grow, what colour your eyes or hair are, and more.

Our genes are made of DNA and we get this DNA from our mum and dad. For example, if a dad has brown eyes, he can pass on the recipe in his DNA to his child which tells their cells how to make brown eyes. This explains why we can look similar to our parents. 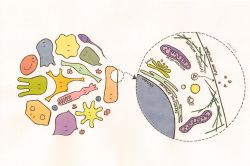 When you’re hungry, you eat! Your stomach then breaks down your food, in a process called digestion. Just like this, your cells also have their own mini stomachs which are important to digest the food and waste from the cell and keep them happy.

If you turn on a light switch, the room quickly lights up. This is because of electricity which is a type of energy, made in big powerhouses. We use electricity for so many things like lights but also TVs, phones, heating and cooling.

Nearly everything that happens inside a cell needs energy too. Therefore, cells have special sections in them called mitochondria, which are the powerhouses of the cell and make all the energy the cell needs to work.

Cells can talk to each other!

If our cells are so tiny and our body is so big, how can all of our cells work together? The answer is they can talk … well, kind of.

Instead of picking up the phone to talk to each other, our cells have to send messages. These messages are made of molecules that help cells communicate.

Here is a cool example. If you get stung by a bee (ouch!) your skin will start to go red and puffy. This may look scary but actually, it is your body helping you. The cells in this area are quickly sending out messages for help. Cells in other areas get these messages and then go in for the rescue.

As scientists, we know a lot about cells. But we still don’t know everything. That’s why we need young kids to stay curious and ask questions, like Bea! 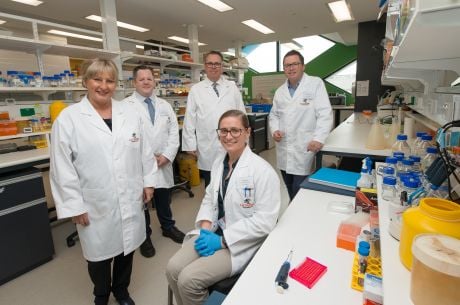