Out of the graduating cohort, 17 accepted graduate positions at Mildura Base Hospital, five will work in other local organisations and five have accepted nursing positions elsewhere.

"I think we are lucky in Mildura that we can provide a great service to our students," she said.

"We get to know them very well and we support them in lots of ways.  It's a smaller campus so they don't tend to get as lost and, if they do, we are aware of it and it increases their chances of success," 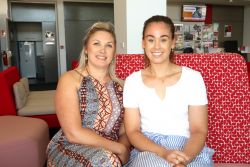 Jessica Littore has accepted a graduate position with the Royal Melbourne Hospital for next year and says she was most impressed with the placement opportunities throughout her degree.

"The placements that were offered were so varied," she said.

"We were offered to do placements in Melbourne and across other regional towns.  Other places internationally were offered and i was lucky enough to go to Nepal a few weeks ago for one."

Another graduating student, Tara Kirkwood, has studied for three years at La Trobe and will begin a graduate position with Mildura Base Hospital next year.

Ms Kirkwood said she believed the employment statisitcs were so high because of the continuous support offered by the university.

"They want us to succeed; they always offer help and tell us if we are struggling to approach them about it.  It's been a long hard road, but we finally did it and we are finished."

This article was written by Danielle Meddemmen for the Sunraysia Daily.

Read more about our Bachelor of Nursing and book in online for a course one-on-one appointment or by calling (03) 5051 4000. How do you stay safe on the slopes?

How to reduce your COVID-19 risk at Thredbo, Perisher or Mount Buller