Everybody Needs A Home is this year’s theme of Homelessness Week.  Mildura Social Work academic Dr Chris Horsell’s research challenges ideas about homelessness as an individual issue and calls on government policy makers to have ‘structural compassion’.

Dr Horsell teaches into the Social Work program at La Trobe’s Mildura Campus.  But he’s also made a career in homelessness policy.  He’s currently co-authoring a book on Home and Social Work and an article on Utopian Thinking and Homelessness, as part of this research agenda. 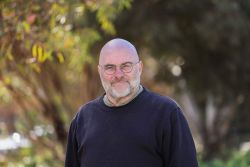 Dr Horsell’s interest in homelessness was sparked during his Social Work placement in homeless day centre in Adelaide, then further again as a qualified Social Worker.  Dr Horsell’s PhD thesis critiqued the way in which terms like ‘social inclusion’ were used to actually continue a history of responding to homelessness in an individualist way, rather than highlighting the impact of structural issues, like lack of affordable housing.

“In South Australia in the early 2000s the concepts of ‘social inclusion’ and ‘social exclusion’ were the buzz words in social policy thinking. Specific groups were labelled ‘social excluded’, for example kids leaving school early, people with significant drug and alcohol issues and ‘homeless’ people.

“The South Australian Government and Federal Government set up ‘Social Inclusion Units’, which worked across government departments to attempt to provide ‘joined up solutions’ to what were seen to be ‘joined up problems’ - the theory being that social issues such as homelessness could only be effectively addressed through multi agency cooperation.   While I was critical of the social inclusion initiatives of the 2000s,  I think they were genuine attempts to get beyond the ‘silo’ mentality that has dominated policy thinking about homelessness for many years and unfortunately continues today.”

“I have talked about the need for more effective structural solutions to homelessness.  The biggest myth I feel needs addressing, is the idea that being or becoming homeless is a function of individual choice and people who are labelled as homeless are in some way deficit.  A lot of what I, and many others writing in the area, have tried to highlight is that homelessness has a major structural context.  Poverty, unemployment, domestic violence, lack of a cohesive, affordable housing and government policy regarding asylum seeking -  are just some examples of the ways in which big picture issues contribute to people becoming homeless.

“The impact of COVID 19 has been profound for people experiencing homelessness. For those sleeping rough, questions of social isolation and stigma become even more accentuated.  Observers are saying, now is the time to really addresses these issues.”