Our brand new Mildura graduates share what stands out about regional campus life.

There’s something special about La Trobe’s Mildura campus. Beyond its natural beauty – think blue skies, eucalypts and a 10-minute bike ride to the Murray River – lies a personalised approach to learning and strong local ties.

Meet some of the newest members of La Trobe’s alumni community to discover what they loved most about studying in Mildura and where they’re headed next in their careers.

1. Rebecca is a graduate nurse and role model mum, who loves how La Trobe’s pathway program set her up for study 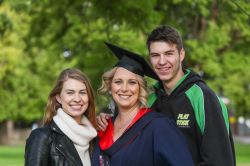 Alumna Rebecca Hynam always planned to be a nurse. Finishing high school, she even started a nursing degree. But life took her along a different path.

First came a career in telecommunications and, later, a role at a local bank. She raised two kids as a single mum before marrying a Mallee farmer, and they moved to Victoria’s northwest with their blended family of five.

However, things got tough. Her husband lost his family farm and, not long after, Rebecca was cut back to casual hours at the bank. With financial stress levels rising, she knew something had to change.

It was around this time that Rebecca heard about La Trobe’s Tertiary Preparation Program on the radio. The program teaches foundational skills and learning strategies to help prepare students for university – exactly the kind of refresher Rebecca needed after time away from education. With the program due to start in only a few days, she took a chance and enrolled.

‘The program completely set me up for understanding lectures, workshops, the Learning Management System and the overall layout and processes of La Trobe’s Mildura campus. It made a huge difference and helped me establish many friendships,’ Rebecca says.

Rebecca completed the program with grades high enough to move straight into a Bachelor of Nursing (Pre-registration), from which she graduated in 2019. She credits being able to study locally as giving her strong industry connections while she was still studying.

‘I was able to stay with my family in my home town and still get a Bachelor in an amazing profession. It gave me the opportunity to study with local people and the smaller class sizes allowed for more intimate discussion and learning time with the lecturers and support staff within La Trobe’, she says.

Her advice to those starting out at university is to tap into to the variety of on-campus support that’s available.

‘The staff in the office are an amazing source of information and Lyn in the library is any uni student’s guardian angel!’

Today, Rebecca works at Mildura Base Hospital in a graduate role. She aspires to work in the maternal health nursing area and plans to achieve this through further study.

‘I went to university to further my career, but I was also able to show my kids that it’s never too late to change and improve yourself. I hope I can be a role model for my kids to excel in life.’

2. Phoebe is a graduate teacher who loves how many ways there are to get involved on campus 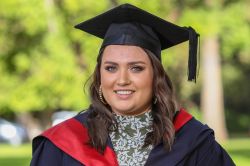 To launch her career as a primary school teacher, education alumna Phoebe Bray first had to move towns. In 2015, she travelled 300km from her home in Broken Hill, NSW, to study a Bachelor of Education (Primary) at La Trobe’s Mildura campus.

‘I was lucky enough to have family in Mildura, so I already felt like I was part of the community,’ says Phoebe.

The feeling of belonging only grew stronger once Phoebe arrived on campus. She says staff and students there made it a supportive and nurturing environment.

‘They say it takes a village to raise a child. Well, the same can be said about making a graduate,’ she says.

‘La Trobe’s Mildura campus isn’t only a place where you come to learn and attend classes. It’s also a safe community where you’re able to seek help, attend events or even just hang out.’

During her time at La Trobe, Phoebe was heavily involved in the Mildura Students’ Association, first as a committee member, then secretary and president. She also took part in the school partnership program, the mentoring program and gave back as a Peer Learning Advisor.

It comes as no surprise, then, that Phoebe’s advice to new students is to get involved on campus.

‘By getting involved, you’re able to make new friendships, create connections, develop your skills and really enjoy your university experience outside of what you’re studying.’

In the final year of her degree, Phoebe participated in La Trobe’s Teaching Schools program. The program gave her the opportunity to develop her practice in a real school setting, receive regular feedback and advice which she could implement straight away, and develop meaningful relationships with primary school students over a longer period of time.

‘Participating in the Teaching Schools program definitely gave me the opportunity to stand out when applying for jobs. I was able to provide a great amount of experience and evidence of my practice, as well as referees who could vouch for my teaching.’

Phoebe’s dedication to honing her teaching skills has been rewarded. As a new graduate, she’s already at work in a full-time teaching position at Mildura South Primary School – and she couldn’t be happier.

‘I teach prep, have 24 students in my class and am loving it! The people I work with are extremely supportive, the community the school has developed is very welcoming and every day I’m learning something new.’

3. John is a social work graduate who loves the welcoming campus community Alumnus John Niyera says he’s always disliked injustice. A Burundian man and father of three, John sought refuge in Australia due to a civil war in his home country. His lived experience of conflict and its impacts on others inspired him to pursue a career in social work.

‘I wanted to work with people from a refugee background and people with special needs. I needed a course that would provide me with the skills to challenge decision-makers and advocate for groups who are socially, culturally, economically and politically affected,’ John says.

John admits he was initially worried about how he and his family would settle into life in regional Victoria.

‘My first few years in Australia were a struggle for me. Initially I lived in Wollongong and felt lonely and lost at times. At some points I felt like an outsider and it was hard to form connections.’

Fast-forward to 2019, and John has graduated with a Bachelor of Human Services/Master of Social Work (2019) from La Trobe. He says the campus community was pivotal in helping him feel a sense of belonging.

‘I had amazing lecturers throughout my studies and placements. Most of them were social workers, too, so I benefited from their experience and formed ongoing networks, friendships and connections. I was supported throughout my course by so many wonderful people, including my family.’

John is currently putting his degree into practice across two challenging roles. As a support worker for the Department of Health and Human Services, he helps people with special needs go about their daily life. And as Assistant Executive Officer at social enterprise Food Next Door, he supports new migrants from diverse backgrounds to farm under-used local land.

‘I’m very grateful for both jobs. I get to work with an incredible team of people, who are full of energy and love for the community,’ he says.

‘I’m always helping someone live their best life. Every day I add a smile to someone’s face. There’s no better way to give back.’

4. Chantelle is a graduate kindergarten teacher who loves the flexibility of online learning Alumna Chantelle Wyld (pictured left, with fellow graduate Tracey Kourdis) worked as an early childhood professional for almost two decades before the urge to upskill and become a kindergarten teacher grew too strong.

‘It was something I’d wanted to do for many years, but just kept putting it off. After having my children, I decided the time was finally right: I needed to do something for myself,’ she says.

So, as a mature age student, Chantelle returned to study. With young children, part-time work and a family business, she found it challenging to fit everything in. But gradually Chantelle developed a routine, studying at night when her children had gone to bed.

Then there was the additional challenge of learning online – something Chantelle came to love.

‘I found the online learning environment overwhelming to begin with, but once I found my way around the platforms, I found it wonderful! It was excellent to be able to do my work in my own time, while still having the structure of due dates for assessments.’

Looking back, she says studying as a mature age student had lots of benefits – like being able to bring her considerable work experience to the degree.

‘I had the practical experience and the knowledge, which actually made the work quite easy, if time-consuming. And while I needed to re-learn how to do assessments, referencing and book work, help was always near, whether from La Trobe teachers, other students or my colleagues.’

Another benefit was the degree’s flexible delivery. Chantelle was able to complete half of her placements in her current workplace, do her other placements locally, and switch between full- or part-time study.

‘It was less financial pressure knowing I could still be paid my usual wages while studying to support my family. And I was able to change my study load as I needed, to suit my family’s needs and my own wellbeing,’ she says.

‘Doing placements locally also meant I could meet other Early Childhood Professionals, many of whom I still work with, and who inspire me every day. Getting to show my skills on placement certainly helped me with graduate job opportunities. The need for Bachelor-qualified kindergarten teachers is high and I had work being offered to me left, right and centre when I graduated.’

Chantelle now works as a kindergarten teacher in two local kindergartens. She says she ‘absolutely loves’ her career.

‘Every child deserves a great start to their education. They deserve a role model to inspire them to be successful. I hope to be that role model.’

Chantelle encourages anyone with a diploma in early childhood services to advance their career by upskilling.

‘At times it was exhausting being a mum running a household, a wife, a part-time worker and a student, but it’s totally worth it in the end. The sense of achievement and satisfaction is amazing,’ she says.

‘My words of advice to other mature age students are: employ a house cleaner; allocate a full day each week to yourself for study; and ask for help if you need it. People are always willing to help, you just need to ask!’