Rosy-cheeked social robots Charles, Sophie, Matilda and Jack will be used in a world first trial to increase wellbeing for mild dementia patients. 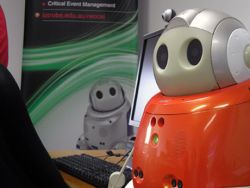 ‘These assistive robots are expected to improve the emotional wellbeing of mild dementia sufferers through engagement and sensory enrichment,’ says Professor Rajiv Khosla, lead researcher on the project and Director of the Research Centre for Computers, Communication and Social Innovation.

The robots provided by NEC, Japan have been designed by Professor Khosla’s team for service and social innovation in health care.

‘They can talk, sing, dance, play games, tell the weather and read the newspaper.  They are unique, the first of their kind to be used therapeutically for mild dementia sufferers,’ says Professor Khosla.

‘They include innovative services like reminiscing with dementia suffers, sending mood based emails and supporting care-givers to remotely manage activities of dementia sufferers.

‘Robots will interact with participants and measure their social response by detecting changes in emotional state of participants,’ says Professor Khosla. ‘We believe these robots will help the dementia sufferers to gain confidence in daily life and reduce feelings of uselessness.’

The robot trial is set to commence in Melbourne in February. Each robot will be placed in the home of one dementia sufferer for two weeks. The emotional wellbeing of each participant will be measured by their responses to the robot, as well as surveys before and near the end of the trial.

The trial will also study the impact on quality of life of care givers involved in supporting the dementia suffers. The trial is funded by a $40,000 Alzheimer's Australia Dementia Research Foundation grant. Other co-investigators in this project include Professor Yvonne Wells and Dr Mei-Tai Chu.

Professor Khosla says that ‘the trial has attracted national and international interest.  The robots starred in a French documentary film entitled ‘A World Beyond Humans?’ last year.

‘They could revolutionise the way we look after older people with dementia.  The social robots are already breaking technology barriers and are set to provide more sophisticated and emotionally engaging services to help our senior citizens become more independent and resilient,’ says Professor Khosla.

The social robot project is a joint research venture between La Trobe University and the global electronics giant, NEC Corporation.