PUBLIC LECTURE: What would Gandhi do?

An International statesman described as one of the finest and most challenging minds of our time will visit Bendigo on Monday 18 March. Peace activist Professor Rajmohan Gandhi will visit Bendigo thanks to the Australian National University (ANU) and La Trobe University. 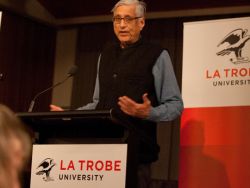 Professor Gandhi is the grandson of Mohandas K. Gandhi – or Mahatma Gandhi – the human rights activist who led a peaceful resistance movement against the British Empire’s control of India.

Profoundly influenced by his grandfather’s legacy, Professor Gandhi has spent his life working as a journalist, biographer and peace builder.

‘Professor Gandhi has been engaged for half a century in efforts for trust-building, reconciliation and democracy as well as in battles against corruption and inequality,’ said Professor Hal Swerissen, Pro-Vice Chancellor (Regional).

‘He has worked consistently for religious and cultural reconciliation between India and Pakistan, Hinduism and Islam as well as between Islam and the West.’

Professor Gandhi is in Australia at the invitation of the ANU and will visit Bendigo on Monday 18 March for a private audience and workshop on social and cultural change with students from Bendigo Senior Secondary College, Catholic College Bendigo and Girton Grammar School.

That evening he will deliver La Trobe University’s annual Sir John Quick Lecture, where he will relate anecdotes about his grandfather as well as discuss the question ‘What would Gandhi do?’ with students selected during the afternoon’s workshop.

‘We are honoured by Professor Gandhi’s visit and are thrilled that our students and community will have the opportunity to discuss the potential for peaceful and powerful social change with him,’ said Professor Swerissen.

The Sir John Quick Memorial Lecture Gandhi: The Man, His People and the Empire will commence at 6.00 pm on Monday 18 March at The Capital, 50 View St Bendigo. A book signing and light refreshments will conclude the evening. Bookings are essential. RSVP to bendigo-events@latrobe.edu.au or by calling 03 5444 7374.

Rajmohan Gandhi is a democratic rights campaigner and former member of the Rajya Sabha (the upper house of the Indian Parliament). He is the author of nine books including two on his grandfather; Mohandas: A True Story of a Man, His People and an Empire, and The Good Boatman: A Portrait of Gandhi. His latest book is A Tale of Two Revolts: India 1857 & the American Civil War.

He has served as a Jury Member for the Nuremberg International Human Rights Award and is Co-chair of the Centre for Dialogue & Reconciliation, Gurgaon, India. He is also a Research Professor at the Centre for South Asian and Middle Eastern Studies, University of Illinois at Urbana-Champaign, USA.

Before teaching at the University of Illinois, he served as a Research Professor with the New Delhi think-tank, the Centre for Policy Research. He has also served as Editor of the daily Indian Express in Madras (now Chennai), and the weekly journal Himmat, published in Bombay from 1964 to 1981.

About the Sir John Quick Lecture

The lecture series has been established in honour of an acknowledged ‘father’ of Australian Federation, Sir John Quick, who was awarded a knighthood in 1901.