The first issue of Writing from Below, a new peer-reviewed academic journal that will publish interdisciplinary writing in gender studies, has been launched today at La Trobe University. 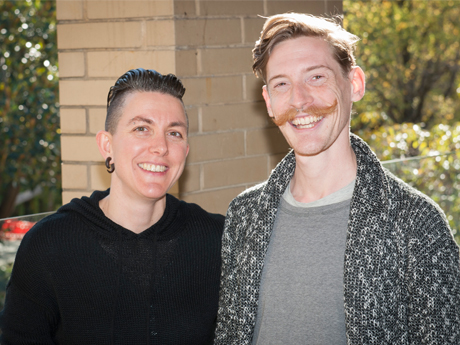 Writing from Below will be the only journal in Australia that specifically provides a space for creative and academic explorations of gender, sexuality and diversity. Unlike many academic journals, it will also be free and open-access.

The journal is the brainchild of La Trobe University student Karina Quinn, who is undertaking a PhD in the English Department. Ms Quinn and her fellow PhD student, Nicholas Cowley, are the Managing Editors of the journal. Dr Stephen Abblitt, who recently received his PhD from La Trobe, is the Reviews and Layout Editor.

Ms Quinn says that the journal fulfils a number of different purposes in the Australian literary and academic landscape.

‘In the face of a decline in gender studies across the Australian university sector, I felt it was really important that there be a vibrant and open space for writers of all disciplines to talk about issues of gender, sexuality and diversity – from a range of perspectives,’ says Ms Quinn.

Professor Dennis Altman, author of the forthcoming book The End of the Homosexual? (due for release by UQP in August) is a strong supporter of Writing From Below.

‘The terrain of gender and sexuality is rapidly changing, as tensions between challenging long-held assumptions collide with the push to integrate into conventional structures such as marriage,’ says Professor Altman.

‘It’s exciting that a new generation of students are entering this debate with a journal that promises to acknowledge that the personal is political, and recognises that the persecution of people because of their gender or sexuality is linked to larger issues of social justice.’

The journal invites submissions from a broad array of disciplines, including work that is difficult to place in subject-specific journals. In particular, it is designed to provide further opportunities for postgraduate students and early career researchers to publish their work.

‘As a student who writes in the field of gender, sexuality and diversity, I’m keenly aware that many academic journals struggle to bridge the divide between disciplines,’ says Ms Quinn. ‘This journal will provide opportunities for writers who don’t work within the boundaries of, for example, purely critical or purely creative work.’

‘The basic ethical demand of Gender, Sexuality and Diversity studies is to address social exclusions, and the creation of a journal where these issues can be debated, discussed and explored both creatively and critically is part of the response to this demand.’