Share
On Wednesday 15 May, La Trobe University’s Melbourne Campus is expected to be a hive of activity for the Fairtrade Expo as part of the Australia-wide Fair Trade Fortnight. 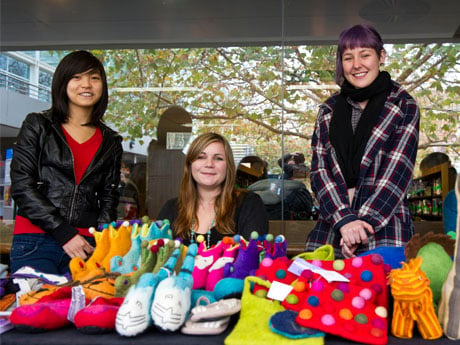 The University is committed to supporting Fairtrade wherever possible, and in 2012, 98% of coffee purchased by the University was ethically produced under the Fair Trade label.

Organiser of the Fair Trade expo on the Melbourne campus, La Trobe University first year student Jenny Stramilos, said that she wanted to help spread the word about Fairtrade products.

‘I felt it was really important to get involved with such an important social movement,’ says Jenny, who lives in Bundoora. ‘Fairtrade allows Australian consumers to be sure that the produce they purchase from developing countries is ethically produced and traded.’

Jenny is studying a Bachelor of Arts in Legal Studies, and was surprised to discover that many of her peers weren’t aware of Fairtrade, or of the benefits that flow on from buying Fairtrade products.

‘While the University itself has a great track record for supporting Fairtrade, students buying coffees from on-campus retailers are not doing quite so well,’ says Jenny. ‘One coffee shop at La Trobe said that only 10% of coffees they sold each day were Fairtrade, so it’s really important that we raise awareness of the Fairtrade movement, both amongst La Trobe students and more broadly.

‘I want to let students know that the Fairtrade option is there, is affordable, and that people can make a real difference without altering their day to day behaviour,’ says Jenny.

‘It might cost a student just 30 cents extra to buy a Fair Trade coffee from one of La Trobe’s cafés – a small cost for a student, but really important for coffee growers in developing countries.’

There will be a number of Fairtrade retailers and distributors showcasing their products in the campus’ central Agora area, as well as fun activities for students. Jenny and some of her fellow students will be running a Fairtrade stand, and will be available to talk to students and staff about the goals of Fairtrade.

This year’s Expo is the fourth year that there has been a celebration of Fair Trade Fortnight on the La Trobe Bundoora campus, says Joanna Watts, Acting Director of Alumni and Advancement and a member of the Fair Trade Steering Committee at La Trobe.

‘Fairtrade is committed to raising communities out of poverty and ensuring that producers get more money for the crops they produce,’ says Joanna. ‘Under the free market system it can be easy for producers to lack security – a glut in the coffee market, for example, can drive prices down and leave producers vulnerable.’

‘As consumers, it’s easy to feel quite disempowered, so Fairtrade is a tangible way for the consumer to make a difference to communities in the developing world, simply by choosing a different coffee, tea or chocolate product.’

** Note: ‘Fairtrade’ represents the global movement, while ‘Fair Trade’ is the accreditation of the Fair Trade Association of Australia and New Zealand.