Professor Graham Durant will share the excitement and inspiration that is the core business of the award-winning science centre ‘Questacon’, Australia’s National Science Centre, at a public lecture at La Trobe University’s Bendigo Campus on Monday 27 May 6pm. 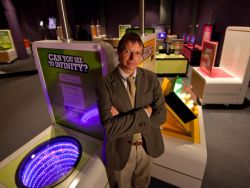 Questacon welcomes 400,000 visitors each year to its interactive exhibitions. With displays on everything from cryptography to sea monsters to volcanic eruptions, the Centre aims to promote an understanding and interest in science, technology and innovation within the community.

In this lecture, Professor Durant will also report on the success of the $21 million ‘Inspiring Australia’ national initiative, launched by the Centre and now in its second year. Inspiring Australia was developed in consultation with Australian science communicators, educators, journalists and scientists. It aims to engage the community and support programs including the Prime Minister’s Prizes for Science and National Science Week.

Professor Durant has a commendable commitment to informal learning in science. He is a recipient of an AM (Member of the Order of Australia) in the 2012 Queen’s Birthday Honours list for his service to science education and scientific advisory roles.

Enquiries about the lecture may be directed to Kristen Pascoe on 03 9479 2556 or via email.