A new study by a La Trobe University scientist has found that Tammar Wallabies are displaying sexual bias in milk composition and ‘invest’ more in their sons than daughters. 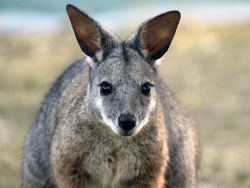 ‘We have found that sons are allocated more protein than daughters early in lactation and this has lasting effects on growth and body size into adulthood’, says Dr Kylie Robert, La Trobe University zoology lecturer and head researcher of the study.

Dr Roberts says, ‘body size is a major predictor of mating success among male wallabies so an increase of protein in the milk could improve reproductive success for both sons and their mothers.’

‘This sexual bias phenomena that has puzzled academics for decades, can be explained by a hypothesis which suggests a mother will invest in the sex that will maximise her reproductive success depending on her body condition and energy reserves being passed onto her offspring.

‘Wallabies in good condition will benefit by producing high conditioned, competitive sons, because these sons will out-reproduce even the best daughters.

‘This explains why there is a higher occurrence of sons among healthy mothers as sons require more energy reserves to become the alpha male but the payoff through reproductive success is greater than if the mother produced a daughter.

‘It also offers a reason as to why mothers in poor health produce more daughters.  It is more beneficial to produce a daughter than a non-competitive son as females are less reproductively competitive and are likely to have more offspring than a male in poor health,’ says Dr Robert.

‘This bias is not only seen in marsupials but has been shown in other mammals, even humans. For example women in poorer health, say with higher parasite stress, produce more daughters while those eating higher fat diets or of high economic wealth produce more sons, and the list goes on.’

Dr Robert says, ‘this research is very important in gaining a greater understanding of marsupial reproductive physiology and maternal control of offspring sex ratios to help better manage and conserve our unique fauna.’

The next step of Dr Robert’s research is to determine mechanisms behind sex ratio adjustment at conception and why some conditions favour fertilisation of the ovum by an X or Y sperm.


Read the full article in the on-line journal, PLOS ONE: ‘ Milk Composition during Lactation Suggests a Mechanism for Male Biased Allocation of Maternal Resources in the Tammar Wallaby (Macropus eugenii)’ at http://www.plosone.org/article/info%3Adoi%2F10.1371%2Fjournal.pone.0051099 Research reveals that better training for volunteer managers is vital