Alumnus recognised as Artist of the Year

Shaun Mackrell, a La Trobe University Bachelor of Visual Arts graduate, has topped off a stellar year by taking out the Shire of Campaspe’s Artist of the Year Award. 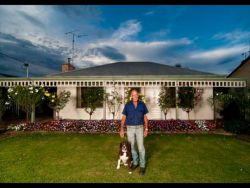 Mr Mackrell graduated in August 2012, and has for the past five years been working steadily on promoting the arts in a regional context.  Mr Mackrell sits on a number of regional boards and is passionately committed to local community art.

In 2012, Mr Mackrell began his largest project to date. With financial support from the Federal Government’s Regional Arts Fund, he returned to the small town of Tongala where he grew up and devoted nine months to photographically documenting the residents and gathering their stories.

Mr Mackrell is very pleased with his award. ‘To be recognised both by my local community and the broader arts community in the last year has been an incredibly rewarding and humbling experience.’

Tongala on show around Victoria

‘What started out as a work from the heart and gift to the people who played such a large role in my formative years grew into something so much larger than I could have ever imagined.’

The end result of his work was an exhibition that toured extensively throughout Victoria, and a published book of both the images and stories he collected.

The series of works titled We’re Still Here were also selected as part of the Stripbillboard Initiatives, The Long and Short of It exhibition where his work was displayed in Melbourne’s Federation Square from September to December 2012.

The project was a resounding success.  Thousands of people came through the doors to view it, garnering a greater understanding of contemporary regional life along with its many rewards and challenges.

‘I owe so much to the staff at La Trobe University. The influences of Julie Millowick, Chris Atkins and Ian Hill have been pivotal in my development. They showed me not only how to take photographs, but how to give them meaning and life. Their wealth of industry knowledge has been a wonderful resource. I honestly could not have received a better education anywhere else’.

Julie Millowick, Senior Lecturer Photography/Online Photojournalism at La Trobe University, in offering her congratulations said ‘Shaun has shown dedication, passion and commitment across all levels of his study.

‘Being a successful practising photographer requires a skill base across not only the specific medium of photography, but also grant writing, promotion, publishing and organising the exhibition. At La Trobe Photojournalism we have a very strong ethical core, and Shaun meets that criterion with images that honour his subjects,’ said Ms Millowick.

The series of works can be viewed online.