How do we solve the Senate problem?

The unexpected and developing election story is that the balance of power in the Senate will belong to “microparties” most electors had never heard of before. 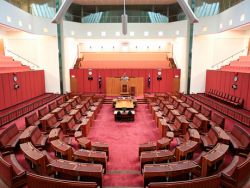 In Victoria, people are asking how Australian Motoring Enthusiasts Party candidate Ricky Muir could be elected, even though hardly one in 200 electors voted for the party.

Australia’s preferential system for the Senate has been distorted by “above-the-line” voting, writing 1 in a box above-the-line for our party of choice, with that party having predetermined all the preferences by means of Group Voting Tickets.

In Victoria, the three major parties (Lib/Nat, ALP and Greens) received 83% of the vote. Around 35 small parties got 17%. To get elected, a candidate needed a quota of around 14.3%. The tiniest parties, including the Australian Motoring Enthusiast Party (AMEP), exchanged preferences with each other. That put AMEP ahead of minor parties like Palmer United Party and Sex Party, whose preferences then elected AMEP.

There is now a great desire for reform. At least six suggestions are being promoted: the abolition of above-the-line voting and Group Voting Tickets so voters decide their preferences explicitly; introducing optional preferential voting to reduce the difficulty of marking all the squares correctly; allowing optional above-the-line preferential voting so voters decide their preferences, group by group; introducing a threshold, a minimum percentage of first preference votes needed to be eligible to stay in the count; increasing the deposit fee from the existing A$2000; and increasing the minimum number of members a party must have before it can be registered.

The great strength of the Australian Senate system is allowing voters to choose not just which parties they support, but also the individual candidates within those parties. Until 1984, all ballots were in the “below-the-line” format, at first with optional preferential voting, and then since 1934 with full preferential voting – a change that led to high levels of informal voting. Above-the-line voting was introduced in 1983, ostensibly to reduce informal voting.

Many commentators and MPs have spoken recently in favour of some reform.

Abolishing above-the-line voting and the related Group Voting Tickets would remove microparties’ power to do deals with each other. Without Group Voting Tickets, microparties would need to actually hand out how-to-vote cards at polling booths for voters to be able to implement their preference deals. But removing above-the-line voting alone would still leave voters the task of correctly numbering all the squares.

This is why the most considered observers, like ABC psephologist Antony Green, suggest that this option be accompanied by reducing the number of squares the voter needs to mark. That minimum number could be the number of persons to be elected, as in Tasmanian lower house polls and – if voting below-the-line – in Victorian upper house polls.

Above-the-line preferential voting would allow a voter to preference only the parties or groups that they choose, whereas the current system allows voters to preference not only parties, but also the individual candidates within them. Such a system would merely facilitate the preferencing of parties, leaving those wishing to indicate a different order of candidates with a much harder task below-the-line. It is a less equal form of democracy, discouraging scrutiny of the actual people being elected.

We may agree the likely defeat in Victoria of Liberal senator Helen Kroger by the Australian Motoring Enthusiasts Party is problematic, but that is because the preference order was not marked by successive choices of the voters, but instead was predetermined by the parties they voted number 1 for. However, those voters might have actually wanted to preference the Motoring Enthusiast candidates. Some reform options would still allow that, whereas an arbitrary percentage threshold – at whatever level it is set – might unfairly deny the voters their directly chosen, well-considered preference.

Increasing deposits and increasing the number of members of parties deal with the parties themselves, and may make candidature costlier. This may still let very wealthy groups fund such abuses.

After the election, what chance is there for reform? Many commentators and MPs – Antony Green, independent senator Nick Xenophon and Liberal senator George Brandis – have each spoken recently in favour of some reform.

Microparties have been elected at the expense of better-known parties, so reform is in the interest of all major parties, as well as being an improvement to Australian democracy. And consider this: if the Senate rejects the new government’s legislation and Tony Abbott calls a double dissolution election, we can, without reform of the Senate electoral process, expect even more horse trading from microparties.

With the lower quota of 7.7%, we might even get two microparty senators per state.

First published on The Conversation on 11 September 2013.

Dr Stephen Morey is an ARC Future Fellow at the Centre for Research on Linguistic Diversity.