We can speak out against a new McDonald's, another freeway or a bigger power station, but is anyone listening to local voices anymore? 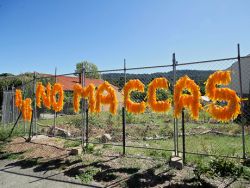 What does democracy mean in Victoria? We vote every four years, and if we don't approve of what elected governments are doing on our behalf we can protest - write letters, call talkback radio, sign petitions, demonstrate, blog, Twitter and mobilise our Facebook friends. We talk back to power with impunity, not without risk of surveillance, but generally free from fear of incarceration.

Freedom of speech is no small thing, but is anyone with power actually listening? If you are speaking on behalf of a community that sees its quality of life threatened by fast food outlets, freeways, power stations or coal mines, you probably shouldn't hold your breath waiting for someone in power to respond. You think it's a bad idea to invest in roads when overwhelming evidence points to the need for public transport, never mind destroying precious parkland in order to move gridlocked traffic from the end of the Eastern Freeway into a tunnel? It's not up for debate, least of all by the people immediately affected by it! Government determination to build the east-west tunnel without regard to expert opinion, community opposition, fiscal responsibility or common sense sends a clear message. They have the power and they intend to use it.

Government refusal to engage with the community leaves people opposed to what they consider inappropriate development doubly aggrieved. They are angry about the blight on their landscape, but at a deeper level they are angry about what they see as the circumvention of democratic process involved in its approval. It matters little that the letter of the law has been followed if people feel that the spirit of democracy has been defiled.

The current standoff between protesters and developers at Tecoma is a prime example. Yes, the VCAT decision to allow McDonald's to proceed with their plan for a 24/7 franchise in the Dandenong Ranges was legal, but it lacked legitimacy in the eyes of the community. A consistent theme in published interviews with protesters relates to their sense of democratic outrage. Their elected local government refused McDonald's application for a permit; 90 per cent of surveyed residents did not want McDonald's in their town. Unsurprisingly, people feel cheated when an unelected tribunal rules in favour of a global corporation over the wishes of local government and the community it represents. It might be legal, but it doesn't feel ''democratic''. Nor does McDonald's resort to legal action feel ''just''.

While McDonald's is legally entitled to initiate court action against the ''Tecoma 8'', the asymmetry of money and power leaves people feeling that the law is being used for corporate bullying. The possibility of risking the family home to pay legal expenses deters even the most determined community activist. It is certainly ''legal'', but it is not experienced as ''just'', and when people lose faith in the legitimacy of social institutions, social cohesion is damaged. Naive as it may seem, ordinary people like to think that citizens in a democratic society are equal before the law; McDonald's versus the Tecoma 8 does not feel like ''equality''.

It matters little that the letter of the law has been followed if people feel the spirit of democracy has been defiled.

Faith in democracy has also been challenged in the inner north, where the Planning Minister overruled local objections to Singapore Power-AusNet's proposed expansion of the Brunswick Terminal Station's capacity from 22 to 66 kilovolts. Company plans had been twice rejected by the Moreland council on health, safety and environmental grounds, first in 2010, then in 2011. In February 2012 the Planning Minister intervened, rezoning the terminal station site in King Street, East Brunswick, as ''Special Use'' rather than ''Residential 1''. Nothing substantial had changed. The site was still in the middle of a residential area at the edge of the Merri Creek parkland, but this deft stroke of the ministerial pen removed the community's right to further appeal, except through the courts. As in Tecoma, this would be a contest between a global corporation and citizens whose homes were on the line if they lost the case.

While the Planning Minister's decision was ''legal'', those destined to live with its consequences saw it as hijacking democratic process. They responded in the usual ways - wrote letters, held meetings, organised rallies, handed out leaflets, maintained a weekly vigil near the site and presented the Premier with a petition signed by more than 3000 people calling for an independent review panel. A delegation visited minister Guy's electoral office in the hope that, as their representative in the Legislative Council, he might be persuaded to listen to their concerns. They spread their message on social media with a Facebook site, YouTube videos and Twitter. This vigorous exercise of the right to ''free speech'' has been met with resounding silence from Spring Street, with neither Premier nor minister responding to requests from community groups and three councils for a meeting, much less an independent inquiry.

Reflecting on these community campaigns, what might we conclude about the current state of democracy in Victoria? Immediately apparent are the limits to grassroots participation in decision-making about matters of planning and infrastructure. Once elected, state governments are free to impose their vision for the future, over-ruling decisions of local councils and ignoring feedback from constituents. If government power to make these decisions was backed by the authority that comes from being seen as competent and impartial, this would not be a problem. There are always winners and losers in planning disputes, and sometimes local concerns have to be disregarded in the interests of society as a whole. What is at issue here is whether these contested planning decisions are in the interests of society as a whole. If not, whose interests are served? How you answer these questions will shape your views on whether Victoria is better described as a democracy or a corporatocracy.

First published in The Age on Thursday, 1 August, 2013

Dr Beryl Langer is an honorary associate in the school of social sciences at La Trobe University.