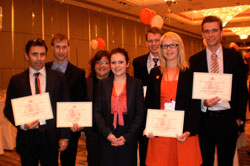 Consolidating La Trobe University's international reputation as a law school which moots at the highest levels, the La Trobe Law School team reached the semi-finals of the Vis (East) International Commercial Arbitration Moot Competition in Hong Kong, placing 3rd out of 90 universities that came from all around the world to compete, including prestigious schools such as Harvard and Freiburg. The team was the highest ranking Australian law school with the other Australian universities that competed including Deakin, Griffith and Bond.
La Trobe Law School’s mooting team continued its success in the Vis International Commercial Arbitration Moot in Vienna where it ranked second highest in Australia. The team reached the finals and placed in the top 10% of the 285 Law Schools from 71 countries competing in Vienna.
La Trobe Law School’s mooting coach Magda Karagiannakis, is excited by their success.
‘The Vis Moot is the closest thing to legal Olympics that exists’ explained Magda. ‘We were the highest ranking and then the second highest ranking Australian Law School in each competition- this is a tremendous result.’
In Hong Kong La Trobe’s oralists were recognised for their excellent advocacy with both Paul Bekier and Eric Dober receiving honourable mentions for their advocacy throughout the competition.
The international team from Vis Hong Kong carried their hard work and team excellence to Vienna with main advocates Lauren Burke and Nico Baarlink excelling in what is a very difficult competition involving more than 1,000 law students from all around the world.
‘Through mooting our international team has developed written and oral advocacy skills, learnt the value of team work and have networked with lawyers, judges and academics from all around the world’ says Magda
‘It is a real pleasure to coach such a talented and self motivated group.’
Overall the competitions have been an outstanding educational experience for the La Trobe Law School team consisting of Paul Bekier, Eric Dober, Nico Baarlink, Lauren Burke, Andrew Vincent and Satu Aho.

To watch the moot court in session please visit: www.latrobe.edu.au/news/videos/la-trobes-moot-court-in-session