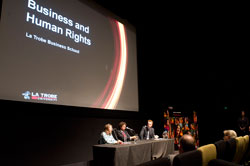 The event, held at the Australian Centre for the Moving Image (ACMI), looked in-depth at how business can impact both positively and negatively on human rights and what organisations can do to promote good business practice in the area.

Organised by La Trobe Business School Professor Ken McPhail, the seminar featured Ms Guáqueta presenting an overview of the guiding principles on business and human rights which were recently endorsed and adopted by the United Nations. The endorsement of the principles is widely regarded as one of the most significant developments in corporate social responsibility in the past decade.

Simon McKeon’s presentation touched on his personal experiences with organisations, many of whom are doing great work on the human rights front but are often overlooked

As Chairman of Business for Millennium Development (B4MD) a group that helps Australian Businesses identify and develop opportunities in developing communities, Mr McKeon assists companies build commercial enterprises with those who are poor, creating pathways out of poverty.

‘B4MD encourages Australian businesses to operate in the developing world where we can do what we do best and make a difference as well as make a profit’ says McKeon.

B4MD has helped create financial infrastructure in remote areas around the world, improving the conditions of local workers and communities.

The seminar compliments La Trobe Business School’s educational focus which promotes a culture of linking business performance with social responsibility, La Trobe University was proud to be the first Australian signatory to the UN’s Principles for Responsible Management Education (PRME) in 2008.

‘The preamble to the Universal Declaration of Human Rights calls on every organ of society to teach and educate for the promotion of the rights the Declaration contains.’ says Professor McPhail.

‘However, few if any business schools engage students in any kind of systematic or critical discussion of the relationship between business and human rights.’

This inaugural public seminar of the La Trobe Business School begins to explore how the discourse of international human rights is shifting to focus on the responsibilities of corporations in relation to the protection and promotion of human rights.


More about the Guest Speakers

Simon McKeon
Named Australian of the Year in 2011, Simon McKeon is the Executive Chairman of Macquarie Group’s Melbourne office, Chairman of CSIRO and Business for Millennium Development and the Director of VisionFund, World Vision International’s microcredit arm, Global Poverty Project and Red Dust Role Models.
He is an Australia Day Ambassador for the Victorian Government and serves on the Federal Government’s Human Rights Grants Scheme Advisory Panel and the Victorian Government’s NDIS Implementation Task Force.

Simon is the helmsman of Macquarie Innovation which in March 2009 became the first sailboat in the world to sustain more than 50 knots and in so doing, peaked at a speed of 100 kmh (54 knots).
He is also a Patron of the Australian Olympic Sailing Team which won 2 gold and a silver medal at the 2008 Beijing Olympics.

Alexandra Guáqueta (D.Phil. in International Relations, Oxford) is a member of the World Economic Forum’s Global Council on Human Rights; Board member of Shift, the nonprofit created by former Ruggie team members to promote the implementation of the UN Guiding Principles and guest of the Human Rights Working Group of the Australian Global Compact Network

Alexandra joined Flinders University in 2011.  Before relocating to Australia in 2011, she was Head for Social Standards and International Engagement at the Cerrejón, where she led key policy changes on corporate social standards, as well as the implementation of the Voluntary Principles on Security and Human Rights and the UN Ruggie human rights due diligence framework.

From 2004-2008 Alexandra was Research Director of Fundación Ideas para la Paz, a nonprofit looking at peace and conflict in Colombia. There, she launched the Private Sector and Conflict Programme, which became one of the most influential spaces in Colombia shaping business understandings of their role in peace, the rule of law and human rights.

Alexandra has worked for the International Peace Institute in New York, the Congressional Research Service in Washington and the Colombian Ministry of Foreign Affairs