In early July, the Faculty of Business, Economics and Law was pleased to have Professor Russell Belk visit from Schulick School of Business at York University in Canada.  Professor Belk is the Chair of Kraft Foods Canada and is a world renowned academic figure in the field of marketing. 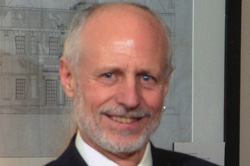 Professor Belk is currently researching the meaning of possessions, collecting, gift-giving, sharing and materialism. By understanding how humans relate to each other through possessions, Belk believes we learn something more profound and practical because in a consumer society, our idea about ourselves are often bound up or represented in what we desire, what we own, and how we use these things.

Professor Belk spent two days at La Trobe University where his activities included attending the La Trobe Food and Wine Festival with other academics, a visit to LUMA, several one-to-one discussions with academic and professional staff from the Faculty of Business, Economics and Law and Professor Belk also presented a seminar on sharing which filled the main chamber of the John Scott Meeting House.

The seminar theme was entitled ‘Enhancing Motivations for Sharing – Marketing’s Role in Global Betterment’ and related to Professor Belk’s seminal work on sharing which was recently published in the Journal of Consumer Research.

The lecture was scientific and based heavily on consumer behaviour research, raising several interesting points about the nature of sharing, and referencing such trends as information and file sharing online, open-source software and the ongoing free music debate.

‘Characterisations of gift exchange in consumer research stress the ability of gifts to forge and reinforce bonds of friendship and love,’ said Professor Belk.

‘It differs from economic exchange which rarely creates communal bonds with other people’..

He then drew a comparison between sharing and gift giving and noted that whilst both are expressions for the desire of connection, sharing differs because of the non-reciprocal character of the action.

‘Sharing tends to be a communal act that links us to other people. It is not the only way in which we may connect with others, but it is a potentially powerful one that creates feelings of solidarity and bonding.’ said Professor Belk.

While his research emphasises the critical role of sharing in consumer behaviour because it is likely to be the oldest form of consumption, Professor Belk said ‘sharing is critical to the most recent consumption phenomena like the internet’.

With the rise of websites such as friendswiththings.com.au and couchsurfing.com which offer sharing services such as gardening equipment or a couch to sleep on free of charge, there’s no doubt that the act of sharing is taking on new methods.
Professor Russell Belk is one of marketing’s best writers. His academic output is almost impossible to encapsulate and he engages with various subjects as eclectic as office furniture in China, gay pride in Toronto, Aboriginal art in Australia, gypsy musicians in Romania, casino consumption in Las Vegas, and pixilated Sims in cyberspace. He also employs methods as diverse as factor analysis, content analysis, signed digraphs, naturalistic research, cultural mapping and hunt-and-peck ethnography; and he experiments with a host of representational forms from videography and photo-essays to creative non-fiction.