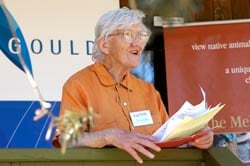 ‘We have lost one of the most outstanding members of La Trobe University, and on behalf of our entire community I would like to express sympathy to Professor Millis’ family,’ said Vice-Chancellor, Professor John Dewar.

Professor Millis served as Chancellor of the University for 14 years from 1992-2006, during which time she presented degrees and diplomas to an estimated 30,000 graduates.

‘Her list of accomplishments is immense. When she retired from the role of Chancellor, the University honoured her with the award of the degree Doctor of Science (honoris causa). The award recognised Professor Millis’ outstanding contributions to Australian science and her great service to La Trobe University,’ said Professor Dewar.

A ‘legend’ in the world of science – she was one of only five Australian scientists recognised on the ‘Australian Legends’ series of stamps in 2002 – Professor Millis has to her credit a string of more conventional scientific and civic accolades, including election to the Australian Academy of Science, an MBE and a Companion of the Order of Australia.

On her retirement, the International Journal of Systematic and Evolutionary Microbiology reported a newly discovered bacterium named Millisa brevis in recognition of Professor Millis’ contribution to water microbiology.

Professor Millis was an active supporter of the expansion of research into new areas and welcomed the large growth in international student enrolments both on and off shore. She took particular pleasure in the provision and expansion of quality education to regional Victoria, giving communities access to new education opportunities.

A pioneer in biotechnology, Professor Millis’ research in microbial physiology, fermentation technology and waste management established her international reputation as one of Australia’s leading scientists.

Professor Millis was often seen on campus, meeting staff and students and was active in study and research in her later years.  She will be greatly missed by the La Trobe community.

The University has recognised Nancy's significant contribution in many ways – including the annual Millis science lecture series, the naming a major research building at the Albury-Wodonga campus after her, and the creation of a much used meeting space, the Nancy Millis Room, in the Student Union Building on the Melbourne campus.