With over 70 per cent of Victoria’s population living in Melbourne, Australian literature is more than ever reflecting the lives of suburban dwellers. 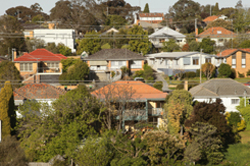 A collection of Melbourne’s novelists, poets, literary and cultural critics will address this modern drift during a one-day symposium held by the La Trobe University Faculty of Humanities and Social Sciences Centre for Creative Arts Thursday 30 November.

The symposium—Suburb slam: Melbourne marginalia, place and writing—will be mapping the words of that sprawling, Australian, heterogeneous universe, between Melbourne's CBD and the Urban Growth Boundary.

Award winning journalists and creative writers will discuss suburban love, crime, horror, family, survival, and lyricism, and how they manifest in text in their own spatially, regionally, and culturally inflected ways.

Following the symposium will be a book launch celebrating new works by three of the speakers.

‘My book fits into traditions of Australian writing about place like a tricky piece in the jigsaw: how can we make this fit, to complete our picture of ourselves? ’ she says.

‘Mostly, Friday Forever is about love using the suburbs as a backdrop for the feeling to take form and mature. It moves from the seaside suburban ‘Arcadian Hells’ of Lennox Head to the itchy-scratchy inner north of Melbourne.’

‘Thief of Lives is a story about writers as psychological vampires and how they take their work from what they observe around them--not only real people for their characters, but also settings. For instance if the history of a place is dark, then it inevitably colours the representation,’ says Dr Sussex.

The symposium will also cover themes related to science fiction, feminism, poetry, communities and journalism in relation to the changing suburban landscape in Australia.

For more information or to arrange an interview please contact

Susan Bradley Smith began her writing life as a theatre and music journalist in Sydney and London and has published extensively as a literary and theatre historian, and creative writer. Her most recent books are the memoir Friday Forever, (Radcliffe: Oxford, 2011) and the poetry collection supermodernprayerbook (Salt: Cambridge, 2010) which was shortlisted for the 2011 Kenneth Slessor Poetry Prize, and The Age Book of the Year Award 2011. Currently working on a biography of Sarah Churchill, and a new collection of poetry, Girl on Fire, she lives in Melbourne and teaches in English at La Trobe University.

Kevin Brophy is the author of eleven books, including four collections of poetry, four works of fiction and three books of essays on creativity and creative writing. He coordinates the creative writing program in the School of Culture and Communication at the University of Melbourne. In 2009 he was co-winner of the Calibre Prize for an outstanding essay (Australian Book Review, April 2009 & Best Australian Essays 2009). From 1980 to 1994 he was co-editor with Myron Lysenko of the national literary journal Going Down Swinging. He is now a member of the GDS Board, patron of the Melbourne Poets Union and a member of the independent poetry publishing house, Five Islands Press.

Sophie Cunningham has worked in publishing for twenty-five years. She has also worked as a teacher of writing and editing and her journalism has been published by a range of papers. She is the author of two novels, Geography (2004) and Bird (2008) and the non-fiction book Melbourne (2011).  Her third novel (in progress) 'This Devastating Fever’ is about Leonard Woolf's years in Sri Lanka. She's also writing a non-fiction book, 'Warning', on Cyclone Tracy and other extreme weather events.

Alexis Harley lectures in English at La Trobe. She has published on autobiography and apostasy, robots and slavery, the poetry of Robert Harris and Simon Armitage, edited a collection of nineteenth-century William Blake criticism, and is completing Autobiologies: Charles Darwin and the Natural History of the Self.

Lisa A. Jacobson’s verse novel, The Sunlit Zone, is currently in press and will be published in May 2012 by Five Islands Press. This manuscript was also shortlisted for the 2009 Victorian Premier’s Literary Awards. An earlier poetry collection, Hair & Skin & Teeth (Five Islands Press, 1995) was shortlisted for the National Book Council Awards. Lisa Jacobson’s poetry and fiction has been published in Australia, New York and London and won many awards. These include the HQ/Harper Collins Short Story Competition, Stand Magazine’s Short Story Competition and a Marten Bequest Travelling Scholarship for Poetry. Her work is represented in Best Short Stories, edited by Giles Gordon & David Hughes (Heinemann, U.K.), The Oxford Book of Modern Australian Verse, edited by Peter Porter, Penguin Australian Summer Stories, edited by Heather Cam, The Age and Heat.

Susan K. Martin is Associate Professor in English and Associate Dean of Research for the Faculty of Humanities and Social Science, at La Trobe University, Melbourne, Australia. She teaches Australian studies and Victorian literature, and publishes on nineteenth and twentieth-century Australian literature and culture.   Her books include Reading the Garden: the settlement of Australia with Katie Holmes and Kylie Mirmohamadi, Melbourne University Press, 2008, and Sensational Melbourne: Reading, Sensation Fiction and Lady Audley’s Secret in the Victorian Metropolis, with Kylie Mirmohamadi, Australian Scholarly Publishing, 2011.

Kirstyn McDermott is a Melbourne author, whose work has been published in various journals, magazines and anthologies, including Aurealis, Southerly, GUD, Southern Blood and Island. She has received various awards for her short fiction and her debut novel, Madigan Mine, was published in 2010 and subsequently won an Aurealis Award.

Meg Mundell’s first novel, Black Glass (Scribe, 2011), is set in a near-future city that could be Melbourne. Meg has published journalism in The Age and The Monthly, and short stories in Best Australian Stories, New Australian Stories, Meanjin and Australian Book Review. She’s now writing a trucking memoir, and a PhD on sense of place (UWS).

David Nichols is co-editor (with Hannah Lewi) of the recent UNSW Press publication Community: Building Modern Australia, a study of community and public buildings in Australia in the twentieth and twenty-first century; and author of The Bogan Delusion (Affirm Press, 2011) a short rumination on Australian society, culture, marginalisation, alienation, and suburbia. In 2012 Monash University Publishing will issue Trendyville, which he has co-authored with Renate Howe and Graeme Davison: a historical overview of inner city 'urban activists' in Australia. He is Senior Lecturer in Urban Planning at the University of Melbourne. He is 46 and lives in Broadmeadows with his wife, the artist Mia Schoen, and their companion animals.

Robyn Rowland AO has published nine books, six of poetry, most recently Seasons of doubt & burning. New & Selected Poems (2010) representing 40 years of poetry. Her poetry has recently appeared in Being Human, ed. Neil Astley, (Bloodaxe Books, UK, 2011). Silence & its tongues (2006) was shortlisted for the 2007 ACT Judith Wright Poetry Prize. Robyn is winner of poetry prizes, including the Writing Spirit Poetry Award, Ireland 2010.  Robyn has created two CD’s: Off the tongue and Silver Leaving - Poems & Harp with Irish harpist Lynn Saoirse.  She has read her poetry in Portugal, Ireland, the UK, the USA, Greece, Austria, Bosnia, Serbia, Turkey & Italy, where, along with Canada, Spain and Japan she has been published.  Robyn curates and presents the Poetry & Conversation Series for the Geelong Library Corporation. An Honorary Fellow, School of Culture and Communication, University of Melbourne, Robyn was Deputy Chair of the Board of the Australian Poetry Centre (2007-2008). Previously Professor of Social Inquiry and Women’s Studies at Deakin University, she retired in 1996 after breast cancer and burnout. She was made an Officer in the Order of Australia for her contribution to higher education and women's health in 1996.

Lucy Sussex’s award-winning writing includes five collections of short stories, most recently Thief of Lives (Twelfth Planet 2011). She has also written Saltwater in the Ink, an anthology of nineteenth-century emigration writing, and Women Writers and Detectives in Nineteen-Century Crimewriting: the Mothers of the Mystery Genre (both 2010). In addition she has a weekly review column in The Age.

Ouyang Yu came to Australia at the age of 35, and, by 56, has published 59 books of poetry, fiction, non-fiction, literary translation and criticism in English and Chinese languages, including his award-winning novel, The Eastern Slope Chronicle (2002), his collection of poetry in English, The Kingsbury Tales (2008), his collection of Chinese poetry, Slow Motion (2009), his book of creative non-fiction, On the Smell of an Oily Rag: Speaking English, Thinking Chinese and Living Australian (2008), his second novel, The English Class (2010), which won the Community Relations Commission Award in the 2011 New South Wales Premier’s Literary Award, as well as being short-listed for the 2011 WA and Queensland Premier’s Awards, his book of literary criticism, Chinese in Australian Fiction: 1888-1988 (2008), and his translation in Chinese, The Fatal Shore (forthcoming in 2012). Ouyang Yu was nominated as one of the Top 100 Melbournians for the year 2011.