Professor Jianfu Chen of La Trobe University’s School of Law has been selected to join the prestigious 1000-Plan, China’s highest level program to source top talent from around the globe.* 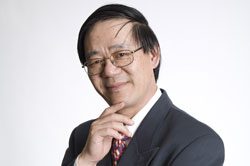 This is a significant accolade for Professor Chen, as he joins a growing list of experts from around the world, acknowledged and recruited for their considerable talent in their chosen fields.
Under the program China will seek to appoint 2000 international experts within 5 to 10 years through a global search, seeking those at the highest level to lead research or management in national key areas in China.
For the first time since its initial implementation in 2008 academic lawyers are included in this latest round of the Plan implementation and only a handful of leading international legal scholars are appointed.
Executive Dean of the Faculty of Law and Management, Professor Leigh Drake congratulated Professor Chen on the honour.
‘It reflects his international reputation and standing, but it is also important in the context of the reputation and profile of the Law School, the Faculty and also La Trobe University.’ said Professor Drake
Professor Chen is among the selected few and the only Australian among the legal scholars. Professor Chen’s brief is to establish and lead a centre for global cooperation in international economic law in Beijing.
La Trobe University Vice Chancellor, Professor Paul Johnson announced the appointment to the Academic Board.
‘This prestigious appointment is a very significant recognition of Professor Chen’s and La Trobe University’s international standing, scholarship and leadership quality’ he said.
‘Members of the Academic Board wish to join me in extending congratulations to him.’
* 28 May 2020: Professor Jianfu Chen advises that he was nominated and selected but declined to join the program.
More about Professor Jianfu Chen:
www.latrobe.edu.au/lawman/about/our-staff/staff-profile?uname=jchen
ENDS
Stephen Scoglio
Web and Communications Officer
T (03) 9479 1604 M 0421 347 816 E S.Scoglio@latrobe.edu.au