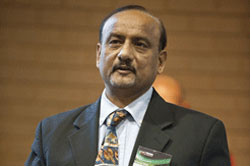 The founding director of La Trobe University’s Islamic Banking and Finance Program, the first of its kind in Australia, Dr Bhatti is being recognised in the ‘Most Outstanding Thought Leader’ category.

This year’s Pinnacle Awards are being held to recognise the most outstanding luminaries in the financial services industry in recognition of Finsia’s 125th anniversary.
Selected by a committee of senior Finsia members from a pool of almost 300 nominations, the ‘Most Outstanding Thought Leader’ category recognises financial services professionals who have demonstrated ‘exceptional originality, innovation or vision’.

The category handpicks those who demonstrate leadership in their field.

‘They have a deep and insightful understanding of the financial services industry, its stakeholders and the broader environment in which it operates.’ states Finsia.

‘Through their constructive arguments, they have shifted paradigms and stimulated innovation, thus expanding the realms of possibility for or within the industry.’