Canadian graduates sworn in to practice

Share
La Trobe University’s School of Law has recently seen two Canadian graduates sworn in to practice in as barristers and solicitors of the Supreme Court of Victoria, a first for the University. 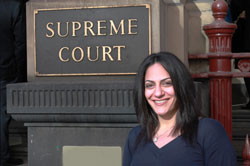 On 23 August 2011, the first Canadian graduates from the School of Law, Elmira Haj Imani and Pooja Sethi, were admitted to practice in Victoria after completing the practical legal training course at the Leo Cussen Institute in Melbourne.

An arts graduate from the University of Toronto, Elmira has described studying law at La Trobe as a life-changing experience.

‘Studying law at La Trobe has been one of the best educational and experiential decisions of my life,’ says Imani.

The highlights were completing a summer school program in Shanghai and working at the Victorian Office of Legal Aid for a semester as part of the School's clinical legal education program.’

Heather King, Director of Undergraduate Studies, who attended the Supreme Court to see Elmira sworn in, says that the hard work and financial sacrifices required for international students to reach this point deserve to be acknowledged.

‘Elmira and Pooja were both part of our first substantial intake from Canada,’ says King.

'The School has encouraged them to seek admission in order to promote their future employment prospects.’


More information on La Trobe University’s School of Law is available at www.latrobe.edu.au/lawman/about/schools/law