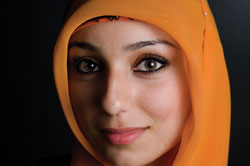 Associate Professor Bhatti was inspired to research the area during the global financial crisis after noticing the strength maintained by the Dow Jones Islamic Index. He discovered that Islamic Banking and Finance (IBF) had also performed well during the Asian and Turkish financial crises. With economists estimating a ten to fifteen percent expansion during the current financial crises in the US and Europe, IBF is the fastest growing area in the financial sector.

Despite this growth there is a lack of  qualified IBF personnel to cater for demand.

According to Bhatti Islamic finance represents a great opportunity to build bridges between multiple cultures and faiths in various communities because of the post-GFC focus on a more ethical approach to financial management.

‘I believe Islamic banking can help all of us to prosper together universally as one community in a global village in the twenty first century and my role is to help prepare students to take leadership roles in this emerging area,’ says Associate Professor Bhatti.
As one of three ALTC Citation recipients in 2010 from La Trobe, Bhatti was very pleased to receive the award.

‘It is very rewarding that my 25 years of hard work and teaching have been recognised with a citation.
‘The recognition is very important to me, for the course and for my students because it shows that the new ideas and hard work can lead to success,’ he says.

He attributes much credit to his colleagues at La Trobe, which he said is one of the most culturally diverse universities in Australia. The course has continued to attract attention from other universities, the government, the financial sector and the media, as it is the only postgraduate course of its kind in Australia and New Zealand.

Many of Bhatti's students have already received scholarships, internships and job offers at prestigious financial institutions and some of high achievers are engaged before graduating.

‘This is an indication that the demand for Islamic banking and finance is very strong, both locally and internationally,’ he says.

Passionate about his work, Associate Professor Bhatti strongly feels that teachers can inspire students, push them to believe in themselves and be a positive force for good.

‘I am very pleased that our program is bringing people together and giving them an opportunity to think outside the box about real economic problems that are facing us all,’ he adds..

In October, 2010, the Australian Government launched a Department of Foreign Affairs and Trade booklet on Islamic Finance in Malaysia and Dr Bhatti was chosen to be part of the delegation launch team. He firmly believes that if the government is able to take constructive steps towards implementing IBF taxation regulation then Australia has the potential to become a financial hub for IBF in the Asia Pacific region.

Enrolment in La Trobe’s IBF courses continues to grow. A total of 92 students are enrolled this year – 40 Masters Students, 11 PhDs and 41 online short course students. The short course is offered on line in conjunction with Ethica Institute in the UAE.

From 2012, La Trobe IBF subjects will be available at postgraduate level, including the MBA degree. Due to high demand IBF will also offered as an elective.