La Trobe University today announced the appointment of Professor Liam O’Connor as the Chair of Systems Biology and Bioinformatics at the La Trobe Institute for Molecular Sciences (LIMS) and the Biosciences Research Centre. 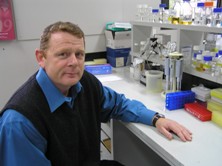 Professor O’Connor has returned to Melbourne to take up the dual appointment after eleven years overseas working in the pharmaceutical industry.

His focus on laboratory and computer-based research will be instrumental in spearheading Victorian research efforts to understand more about human health and disease and the biology of important agricultural species.

Announcing the appointment, Professor Tim Brown, Deputy Vice Chancellor (Research) said the recruitment would significantly enhance the research profile of Victoria and the University’s objective to become further recognised for its premier research status in molecular science, biotechnology and nanotechnology.

‘He is a dynamic Australian with a high international profile who will bring valuable expertise to the biotechnology industry.’

Professor O’Connor was most recently based in the USA as the Director of Quantitative Biology at the Novartis Institutes for BioMedical Research (NIBR), where he had global responsibility for computational and systems biology for the Novartis research community.

He said he was attracted to the position because of ‘its broad scale approach to biology and academic research.’

‘Since the completion of the Human Genome Project and the genomes of other species, modern biological research has increasingly become dependent on computers to process the huge amount of information being generated.

‘This position is rare in that it brings together laboratory and computational-based research in an attempt to find answers to human and animal disease.’

He will divide his time between the Biosciences Research Centre and The La Trobe Institute for Molecular Sciences.

The A$230 million Biosciences Research Centre project is a joint initiative between the Victorian Government, through the Department of Primary Industries, and La Trobe University, and will be a world-class facility for agricultural biosciences research and development.

The $97 million La Trobe Institute for Molecular Sciences will be a world-class facility for molecular science, biotechnology and nanotechnology research and research training, creating 220 extra research positions to address a critical shortage of bioscientists in Australia.

Both centres are expected to be fully operational in 2012.

Professor O’Connor began his career in computer science and mathematics before switching to biology. After his PhD at the Walter and Eliza Hall Institute in Melbourne and postdoctoral work at the MIT Centre for Cancer Research, he joined Incyte Genomics, the MDS Proteomics before his appointment at Novartis Pharmaceuticals.