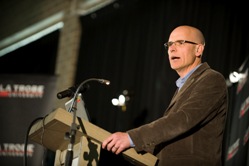 Clive Hamilton is Charles Sturt Professor of Public Ethics at the Centre for Applied Philosophy and Public Ethics. Until 2008 he was the Executive Director of The Australia

Institute, Australia’s foremost progressive think tank. He has held visiting academic positions at the University of Cambridge, the University of Sydney and Yale University. His books include Growth Fetish, Affluenza (with Richard Denniss), Scorcher: The dirty politics of climate change and, The Freedom Paradox.

Professor Hamilton’s lecture will explore the balances being struck between environmental protection and economic growth in the context of the current advice from climate scientists.

He argues that our preoccupation with economic growth is inconsistent with protecting the Earth from severe damage due to global warming.

The lecture is the third of three lectures in La Trobe University’s Climate, Sustainability and Society series, in which prominent speakers draw on science, social science and economic perspectives to address the issues surrounding climate change and sustainability.

The first lecture was presented by leading scientist and climate change authority, Dr Barrie Pittock , at the McKay Lecture Theatre at La Trobe Bendigo and by video-conference at the Albury-Wodonga campus. The second lecture, presented by water resource policy and management expert, Professor Lin Crase, focused on the contradictions and challenges in Australian water policy and was presented live at both campuses.
Members of the public are invited to join staff and students for the final lecture in this innovative series. The lecture commences at 6.30pm, Wednesday 23rd September, in the Main

BACKGROUND
Climate, Sustainability and Society is a cross-disciplinary, cross-campus subject that is being offered for the first time in semester 2, 2009. This first-year level subject introduces students to economic, scientific and sociological approaches to sustainability in the context of climate change.

It has been developed by the Faculties of Law and Management, Science, Technology and

Engineering and Humanities and Social Science on the Albury-Wodonga and Bendigo campuses. It is planned for future offerings of the subject to occur across four or more of La Trobe’s campuses, including to a major cohort on the Bundoora campus.

The teaching will take a problem-based approach through which students will develop a recognition and knowledge of the causes and impacts of climate change and the potential scientific, social and economic responses. It is anticipated that students who successfully complete the subject will demonstrate an awareness of the theoretical and practical tools available to bring advanced decision making to environmental management.

An integral part of this subject is a series of public lectures presented by leading thinkers who represent a range of approaches to issues of sustainability and climate change in different contexts.

Along with members of the public, students who are enrolled in the subject will attend these lectures to experience the nature and shaping of public debate and to gain an appreciation of the relationship between advocacy and enquiry. The students will be guided in their listening and note taking through the provision of four or five key questions provided prior to the public lecture. Their response to the questions will form part of subsequent class discussion.

These lectures will be video-conferenced between venues and filmed to allow students access to the content after the lectures.  In subsequent years, these films may also be shown to later cohorts of students as a stimulus to debate and discussion.