Decision-making in the face of fire

While there’s a lot of research world-wide into fire behaviour – none of it has yet developed sufficiently robust fire danger rating scales that could have covered the conditions predicted for Victoria’s bush fire disaster. 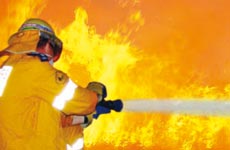 This meant urgent decisions had to be made under extreme uncertainty, says La Trobe University psychologist and fire research specialist, Dr Mary Omodei.

‘Firefighters in both incident control centres and on the fire-ground would have had to make these decisions in the face of fire and weather conditions outside their knowledge and experience.'

Dr Omodei and colleagues in the School of Psychological Science have played a major role over many years in understanding how decisions are made in the attempt to predict and to control fires.

She says those charged with making predictions and decisions concerning these fires faced enormous challenges.

‘Previous research suggests that human decision-making ability deteriorates in rapidly changing and relatively unpredictable fire situations – such as those of last Saturday.

‘While it remains unclear what factors cause such a decline in decision-making ability, our research findings suggest these range from inherent limitations of cognitive processing abilities – limitations that are further aggravated by cognitive overload and physiological and psychological stress – to the communication and coordination challenges faced by teams of people having to exercise decision making control over such situations.

'The weather situation predicted for Saturday and the fire situation that actually occurred would have placed decision makers in situations which exceeded the limits of human decision making abilities on many levels.’

Another aspect of fire research by the La Trobe psychology group deals with understanding individual, community, and demographic factors which impact on recruiting and retaining volunteer fire fighters.

‘Our research, and that of others, indicates several immediate implications for the continuing supply of an adequate number of suitable volunteers.

‘Events such as those we’ve just experienced result in increases in resignations, by volunteers who had particularly stressful experiences during and following the emergency – and an increase in new volunteers as a result of heightened awareness of both the roles and needs for volunteers.’