La Trobe University's Leadership Training Program for Young Muslims – which helps young Muslim men and women participate and succeed in the wider community – has received additional support of $184,000 from the State Government. 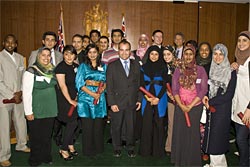 The new grant to continue the successful training program, run by the University's Centre for Dialogue, was announced by the Minister Assisting the Premier on Multicultural Affairs, James Merlino.

Speaking at a ceremony for twenty graduates of this year's course, Mr Merlino said the program's aim was to assist young Muslim men and women to develop the skills they need to engage confidently and creatively with all levels of government, business and academia in the wider community.

"The Brumby Government is taking action to strengthen multiculturalism in Victoria and is a proud supporter of programs that promote harmony, celebrate shared values and increase understanding of our differences," he said.

"It is inspiring to see young Victorians working to break down the cultural and religious barriers within our communities and I congratulate all graduates for their hard work and dedication."

Mr Merlino said the new funding would help to enable all Victorians to participate in society equally and practice their religion, faith and beliefs without fear or favour.

"Courses such as the Leadership Training Program for Young Muslims play a vital role in making this a reality."

Vice-Chancellor Professor Paul Johnson said the program, now in its second year, was the first of its kind in Australia. It highlighted the University's active role in the community, particularly through its Centre for Dialogue, and its partnerships with the Islamic Council of Victoria and the State Government.

Of the many challenges Australia faced as a nation, he said none was more important than making this a society which "values and nurtures its rich cultural and religious diversity".

"Australia's Muslim communities, representing one of the world's great religious traditions, have much to contribute," he said.

(In November 2005, the Victorian Government provided $375,000 to establish the Centre for Dialogue and has since contributed more than $267,000 to run the Leadership Training Program for Young Muslims in 2007 and 2008.)