In 2020, as the coronavirus pandemic spread across the globe, the threat of a new Cold War between China and the United States deepened. A trade war between the United States and China is now being conducted on both sides. Because of Beijing’s new security law, Washington has withdrawn the special commercial status afforded to Hong Kong. Grave human rights abuses—like the Uighur Muslim thought reform camps—have moved to the centre of US-China relations. President Trump routinely blames China for the coronavirus that is devastating the United States and (perhaps more importantly) threatening his re-election prospects. He refers to China not as a competitor but as an “enemy”. Powerful US naval forces now routinely patrol close by disputed land features in the South China Sea.

What of Australia? In 2014 Chinese President, Xi Jinping, was accorded the unusual honour of addressing the federal parliament and was fulsomely described by then Prime Minister Tony Abbott as a much-valued friend. For years, both Coalition and Labor Prime Ministers claimed that Australia did not have to choose between the US, our principal strategic ally, and China, our principal trading partner. Recently relations have changed. Australia has refused to allow Huawei any role in the building of its 5G network. Canberra angered Beijing by calling for a truly independent investigation into the origins of the pandemic. More recently, Prime Minister Scott Morrison held a media conference that was universally understood as a warning to Beijing over the hacking of our key institutions. Beijing has responded by placing a ban on the import of certain Australian products and warning both potential students and tourists about Australian racism. Chinese government Ministers no longer talked to their Australian counterparts.

La Trobe University’s Ideas and Society Program is both delighted and honoured that the Australian Prime Minister with the deepest understanding of China, Kevin Rudd, and Linda Jakobson, the director of “China Matters”, Australia’s best-informed China think tank, have agreed to participate in our third event on the consequences of the coronavirus pandemic. The discussion will be led by Nick Bisley, the Dean of Humanities and Social Sciences at La Trobe University and Rebecca Strating, the acting director of La Trobe Asia. It will focus on some of the most critical of all current international relations questions: Why have relations between China and the United States deteriorated with such speed? Why has Canberra followed the lead of Washington, despite all the attendant dangers? And, most importantly, can a new Cold War between China and the United States and its allies be avoided? Kevin Rudd served as Australia's 26th Prime Minister (2007-10, 2013) and as Foreign Minister (2010-12). Since 2015, he has been President of the Asia Society Policy Institute in New York. In office, Mr Rudd led Australia's response to the Global Financial Crisis, reviewed as the most effective policy in the developed world. Australia was the only developed country to avoid recession. His government also ratified the Kyoto Protocol, delivered the National Apology to Indigenous Australians, implemented a mandatory renewable energy target, delivered the national school curriculum, negotiated major reform of the health system, introduced national paid parental leave, and pursued the world's first plain-packaging regime for tobacco. He is the author of two memoirs, “Not for the Faint-Hearted” and “The PM Years”. Linda Jakobson is Founding Director and Deputy Chair of China Matters, an independent Australian policy institute which aims to stimulate a nuanced and informed public discourse in Australia about China’s rise and its implications for Australia. From 2011 to 2013, she served as the Lowy Institute's East Asia Program Director. Before moving to Sydney in 2011, she lived and worked in China for 22 years and published six books on Chinese and East Asian society. Her last position in Beijing was as Director of the China and Global Security Programme at the Stockholm International Peace Research Institute (SIPRI). Over the past three decades she has served as a policy advisor to the governments of seven countries. Her most recent book, written with Dr Bates Gill, is China Matters: Getting It Right for Australia (La Trobe University Press / Black Inc., 2017). Her current research focuses on Australia-China ties and China’s foreign and security policy. Nick Bisley is Dean of Humanities and Social Sciences and Professor of International Relations at La Trobe University. His research and teaching expertise is in Asia's international relations, great power politics and Australian foreign and defence policy. Between 2013 and 2018 Nick was the Editor-in-Chief of the Australian Journal of International Affairs, the country's oldest scholarly journal in the field of International Relations. Nick is a member of the advisory board of China Matters and has been a Senior Research Associate of the International Institute of Strategic Studies and a Visiting Fellow at the East West-Center in Washington DC. Nick is the author of many works on international relations, including Issues in 21st Century World Politics, 3rd Edition (Palgrave, 2017), Great Powers in the Changing International Order (Lynne Rienner, 2012), and Building Asia's Security (IISS/Routledge, 2009, Adelphi No. 408). He regularly contributes to and is quoted in national and international media including The Guardian, The Economist, CNN and Time Magazine. 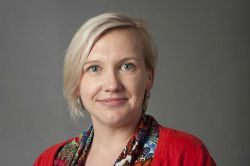 Dr Rebecca Strating is the acting Executive Director of La Trobe Asia and a Senior Lecturer in Politics and International Relations at La Trobe University. Bec is a recognised authority on the international politics of maritime disputes in Asia and Australian foreign policy. She was an Asian Studies Visiting Fellow at the East West Center in Washington DC in 2019 and was awarded the prestigious Boyer Prize by the Australian Institute of International Affairs in 2018.