We're all in this together. Strong social connections make communities more resilient. But today Australian’s have fewer close friends and local connections than in the past, and more of us say we have no one to turn to in tough times. How can we turn this trend around?

Can’t make the live event? Go ahead and BOOK NOW anyway, and we’ll send a recording of the event to your inbox.

We're all in this together.

Strong social connections make communities more resilient. But today Australian’s have fewer close friends and local connections than in the past, and more of us say we have no one to turn to in tough times. How can we turn this trend around?

Join La Trobe’s Ros Ben-Moshe, along with Reconnected authors Andrew Leigh and Nick Terrell in conversation with Bec Scott, co-founder of STREAT, a Melbourne-based social enterprise, as they discuss what works when it comes to community organisations and how we can strengthen our society.

Live Q&A with the audience and book giveaways! Register by Monday 28 September, 11.59pm for your chance to go in the draw to WIN a copy of Reconnected: A Community Builder's Handbook – Andrew Leigh and Nick Terrell.

Reconnected: A Community Builder's Handbook is available for purchase online here or wherever good books are sold. Andrew Leigh is the federal member of parliament for Fenner in the ACT.

Before being elected in 2010, he was a professor of economics at the Australian National University.

His books include Battlers and Billionaires, The Luck of Politics, Randomistas and Reconnected. 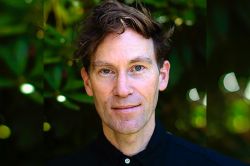 Nick Terrell is an adviser to Andrew Leigh MP.

He has worked closely with Australia’s charity and non-profit sector to protect the voice of community organisations and promote the value of their contribution to Australian communities.

Reconnected is his first book. Bec Scott is the Co-founder and CEO of STREAT, a Melbourne-based social enterprise that works with marginalised young people aged 16-24 years and provides them with a healthy self, job and home. STREAT run a portfolio of 11 foodservice businesses, including cafes, an artisan bakery, a catering company, and a coffee roastery.

In its first decade STREAT worked intensively with over 500 young people, and with a further 1,500 through its outreach programs and short courses. These young people helped serve over 3 million customers. With the organisation wanting to play a larger role in addressing catastrophic climate change and biodiversity loss,

STREAT’s second decade will focus on expanding its training and employment pathways for young people into green jobs. The first of these will be roles into urban horticulture and farming and be part of Moving Feast, a social enterprise sector collaboration to create a fair and regenerative food system for Victoria.

Prior to starting STREAT Bec originally studied as a plant biologist and then spent a decade at the CSIRO. She’s particularly interested in how we can solve complex systemic issues using multi-disciplinary practice and you’ll equally find her collaborating with artists, designers and scientists as you will social entrepreneurs. On the weekend you'll always find her in her pocket urban farm with her son Will (Apprentice Farmer), her wife Kate (the Farmhand) and their dog Magic (the Farmhound). Ros Ben-Moshe is founder of LaughLife Wellbeing Programs and author of the critically acclaimed “Laughing at cancer – How to Heal with Love, Laughter and Mindfulness”, part memoir, part healing guide based on journals written following a shock diagnosis of bowel cancer at 42.

She is Adjunct lecturer at La Trobe University’s School of Public Health and Psychology. Ros has written for many publications including The Canberra Times and Huffington Post and has been widely interviewed including Radio National Life Matters and Dr Norman Swan’s Health Report . Ros is Ambassador for CancerAid and is a Global Laughter Yoga Ambassador.