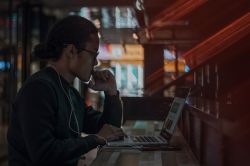 Join La Trobe Law School, La Trobe Law Tech & guest speakers for a discussion on the use of technology for dispute resolution post-COVID19

The use of technology for dispute resolution and to enhance access to justice has increased exponentially during the Covid-19 pandemic. Courts, businesses and ADR organisations have moved online using various platforms and technologies to continue to process cases and provide services to disputing parties.

This webinar will explore the newer issues that arise in relation to technology, dispute resolution, business and access to justice more broadly while also highlighting available technologies, platforms and fields of practice. In addition, it will identify gaps that must be addressed to ensure quality and enhance satisfaction with the process.

Professor Schmitz teaches courses in Contracts, Lawyering, ODR, AI, Data Analytics and the Law, Arbitration, International Arbitration and Consumer Law. She has been heavily involved in ODR research and is a Fellow of the National Center for Technology and Dispute Resolution, as well as the Co-Chair of the ABA Technology Committee of the Dispute Resolution Section and the ODR Task Force. She serves on the Association of American Law Schools Executive Committee on Commercial and Consumer Law, was an External Scientific Fellow of the Max Planck Institute Luxembourg, and is a researcher with the ACT Project exploring AI and ODR.

Professor John Zeleznikow is a Professor at La Trobe Law School. Previously he was Director of the Joseph Bell Centre for Forensic Statistics and Legal Reasoning at the University of Edinburgh Law School, where he was responsible for investigating miscarriages of justice. He has conducted research for 48 years, and received over $A8,000,000 in research grants. He has published four research monographs and ninety-two refereed journal articles  He has performed pioneering research on using machine learning and game theory to support legal decision making. Recently he has pioneered the use of Artificial Intelligence in Online Dispute Resolution and investigated issues of ethics, governance, security and trust.

In 2011 Colin co-founded Modria.com, an ODR provider based in Silicon Valley, which was acquired by Tyler Technologies in 2017. From 2017 to 2020 Colin served as Vice President of ODR at Tyler. From 2003 to 2011 Colin was Director of ODR for eBay and PayPal. He serves on the boards of the Consensus Building Institute and the PeaceTech Lab at the United States Institute of Peace.He is currently Co-Chair of the Advisory Board of the National Center for Technology and Dispute Resolution at UMass-Amherst and a Fellow at the Gould Center for Conflict Resolution at Stanford Law School.

Professor Casanovas is a Research Professor at La Trobe Law School. He is also Director of Advanced Research and Professor of Law and Legal Studies at Autonomous University of Barcelona (UAB), and founder and former Head of the UAB Institute of Law and Technology (IDT-UAB, 2005-2020).  He has been CI or Principal Investigator in over 50 national, EU and international projects, on ODR and agreement technologies. Pompeu was CI of the Catalan White Book of Mediation (2008-11). He has authored or edited over 200 scientific publications in five different languages. His recent work is focused on regulatory models and legal governance for the Web of Data. His last co-authored book (with Marta Poblet and Víctor Rodríguez-Doncel) is Linked Democracy: Foundations, tools and applications (Nature Springer Briefs, 2019).