The impact of the Holocaust on the descendants of survivors and the complex and varied ways in which they embrace, embody, memorialise publically or privately their family histories is the subject of this paper.

There have been distinct periods of Holocaust memory and memorialisation and these demonstrate the changing perceptions of Holocaust survivors from being silenced and stigmatised to valued and heard through testimony and public events as they became increasingly central to Israeli national identity.

This paper explores the changing relationship between survivors and Holocaust memory and memorialisation in the private and public spheres and how that impacts on story-telling and on silences between generations and in turn on family relationships.

The paper draws on an on-going research project that focuses on memory, memorialization and inter-generational story-telling and silences through the lens of the tattoo used in the Auschwitz complex which has become a symbol of the horrors of the Holocaust. The meaning of the tattoo has changed during different periods of Holocaust remembrance shifting from stigma to a symbol of honour to a vehicle for public remembrance (Schultz, 2017).

The decision of the descendants of camp survivors to replicate the tattoo is a growing trend in an era where tattoos are becoming more popular. The paper will consider the genealogy of the tattoo, and its meaning in relation to private and public memorialization. 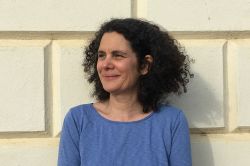 Alice Bloch is Professor of Sociology and Head of the Department of Sociology at the University of Manchester. She researches and writes in the area forced migration studies and her authored books include Living on the Margins: Undocumented migrants in a global city, with Sonia McKay, Sans Papiers: The social and economic lives of young undocumented migrants in the UK, with Nando Sigona and Roger Zetter and a recently edited collected with Giorgia Dona Forced Migration: Current issues and debates published by Routledge in 2019.

Her current research, on the descendants of Holocaust survivors and the concentration camp tattoo is funded by the British Academy small grants scheme.