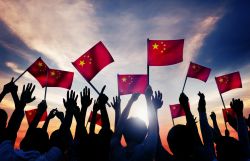 During the 1950s the People’s Republic of China built one of the world’s most progressive set of ethnic policies, creating institutions that were supposed to allow China’s 100 million plus ethnic minorities to “become masters of their own homes.” Yet over the past decades these policies have been abandon in substance and replaced with a coercive set of mechanisms aimed at, in Xi Jinping’s own words, “forging the collective consciousness of the minzu (race/nation).”

These policies are most evident in Xinjiang – where Communist Party officials have interned millions of Uyghurs and Turkic speaking minorities in re-education camps and factories; rolled out a highly intrusive surveillance panopticon; systematically erased indigenous culture, language and religious practices; and built a eugenics program of population control, sterilization and inter-ethnic marriage. Yet these policies of coercive nation-building are also being slowly rolled out across other ethnic regions, including Tibet, Inner Mongolia and even the docile yet diverse regions of Yunnan, Guangxi and Hainan island.

The 'China in Focus' seminar series will highlight China related research at La Trobe University from all disciplines, allowing conversation and analysis on specialised topics with academics and experts.

You can choose to join us for one, two or more seminars on China.

Each seminar will have a 45 min presentation followed by 15 min Q&A.