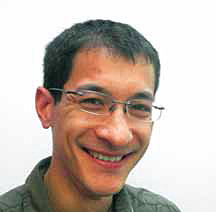 In the world of science, Dr Marc Kvansakul is a 'Tall Poppy' – one of nine young Victorian researchers selected for this accolade by the Australian Institute of Policy and Science.

He recently also received more than $400,000 from the National Health and Medical Research Council to investigate the role of Kaposisarcoma herpesvirus Bcl-2 in the formation of tumours.

His new laboratory at La Trobe probes the biology of cell death regulation. It helps develop new anti-cancer drugs and reduce the side effects of chemotherapy.

A graduate of Imperial College, London, he specialises in the science of protein interactions using X-ray crystallography and the Australian Synchrotron for his experiments. He says that cells are normally programmed to commit suicide if they are infected.

'They "take one for the team" to prevent spread of the infection,' he says. I'm studying how some viruses can block this process and stop their new home from self-destructing.

'This "hijacking" of cells not only allows the virus to breed in safety, but can also help cells to become cancerous.'